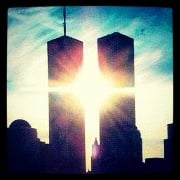 I realized this morning that it’s the 1st
anniversary of September 11th that I am out & about just outside
the city since the attacks. We moved back last year, but I had just gotten home
from the hospital after having Alex & didn’t leave the house. I noticed a
memorial in town, signs for services held throughout the day & a town
service tonight. It seemed like there was so many flags, signs, etc. But then
remembered: I am in a commuter town now & there must have been so many
families affected that day. Being back so close to where those towers stood
makes me think a lot about all the time I spent there growing up & how
amazing they were to me. Instead of sharing a story of where I was that day or
where my husband was, I’d rather share a little about my love of those towers
when they stood tall & proud.

Growing up, I was proud of my dad for a lot of reasons, but
I loved to boast in school that my dad worked in the Twin Towers. They were the
tallest, which meant my dad was the coolest. My brothers, cousins & I spent
a lot of time at work with our dads. They had the best Christmas parties, most
amazing Bring Your Daughters to Work Day I could imagine & our favorite:
New Years Eve. On that day, we all spent the whole morning ripping, tearing
& cutting up all of the trading cards from the floor. Then we would fill
all of the pits with the paper. Then at noon, before the traders left for the
half day, we would have a pretend New Years countdown & throw the paper
like confetti. We were pretty small when we did this, so then we would jump
into pits & swim around in the paper. I wish I had some pictures of this; I
feel my words may not be doing it any justice! But for a 5 year old, this was
one of the coolest things imaginable.
Another thing about those towers: it’s where I was first
given real responsibility. When I got a little older & would visit my dad
at work, my cousins & I would beg our dads to let us shop while they
worked. We no longer wanted to just sit & watch the action on the exchange,
but wanted to head down to all of the amazing shops on the floors beneath us.
The first time they said “yes” I was shocked (& so excited). I was 10 &
my cousins were 7 & 6. I remember my uncle saying: “You are in charge,
don’t let anything happen”. It was the first time I was in charge of anything,
never mind 2 children. We had the best time. I remember holding their hands so
tight while we dodged around the busy shoppers in those towers. That became our
new thing when we visited our dads. When I think about this now, as a mom, it
terrifies me! We were really pretty little, but I guess times were different. I
am fairly certain our moms had no idea.
There are so many memories I have, growing up there.
The first time I came home from college, drove towards the
city it angered me so much not to see those towers. Anger for what had happened
& that those towers no longer stood.
The months after the attacks were very sad. There were so
many lives lost, so many memorials being held & still families that hadn’t
had a chance to find their loved ones at Ground Zero. 11 years later, as I sit
with my girls & listen to all of the names read, it doesn’t seem any less
heartbreaking to me.
As young moms, we are raising a generation of children post
9/11. A generation that will learn about the attacks on our country in history
books. We will share our stories with them about where we were that morning,
about the families that lost their loved ones & why we now have a building
called the Freedom Tower.
(Visited 72 times, 1 visits today)