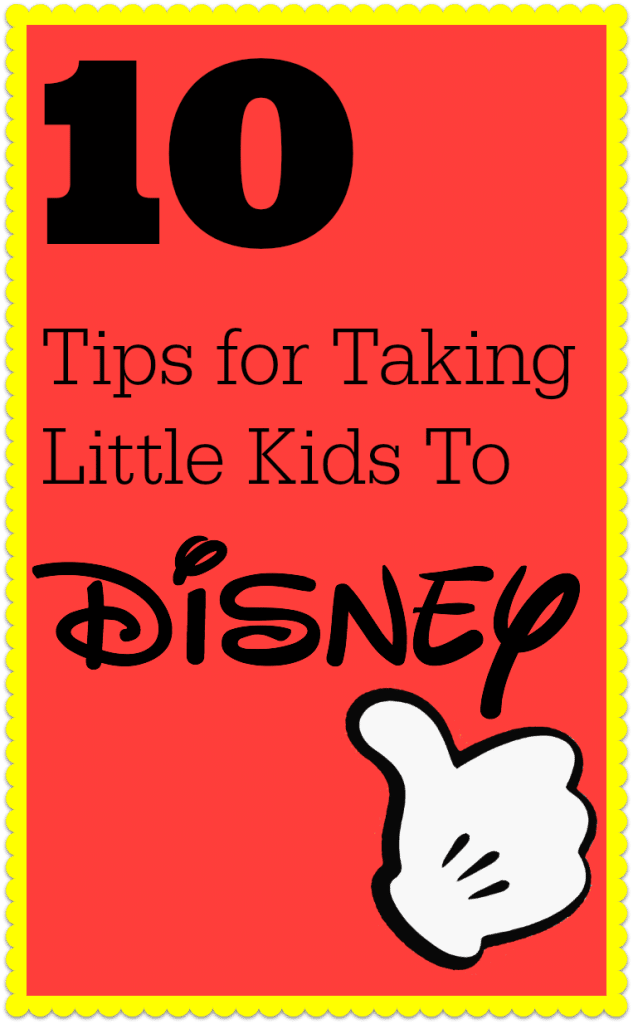 Disney Week continues on the blog! Be sure to check out the posts so far:

Top Things To Do Per Park

I always thought we would wait until the kids were older to take them to Disney World. I thought if we took them when they were really little (2 &4) they wouldn’t remember a thing and it would be meltdown central. Then they discovered the Disney section at the library, princess costumes and the movie Frozen. I forgot how magical the Disney movies and their characters are to kids. We read the book Peter Pan daily, and one night Maggie said “Do you know that Peter Pan lives in Disney World?” A friend of hers went to Disney World and told her all about the trip. Next she said “Cinderella, Minnie and even the Step Sisters live there too”. I started to think about how fun it would be to take them to Disney World while they were small enough to truly believe that each and every thing was “real”.

Many people told me I was crazy to take them so young. While I was planning the trip, I started to realize the most important things were going to be remaining calm, being flexible and remembering to stop and enjoy their reactions! 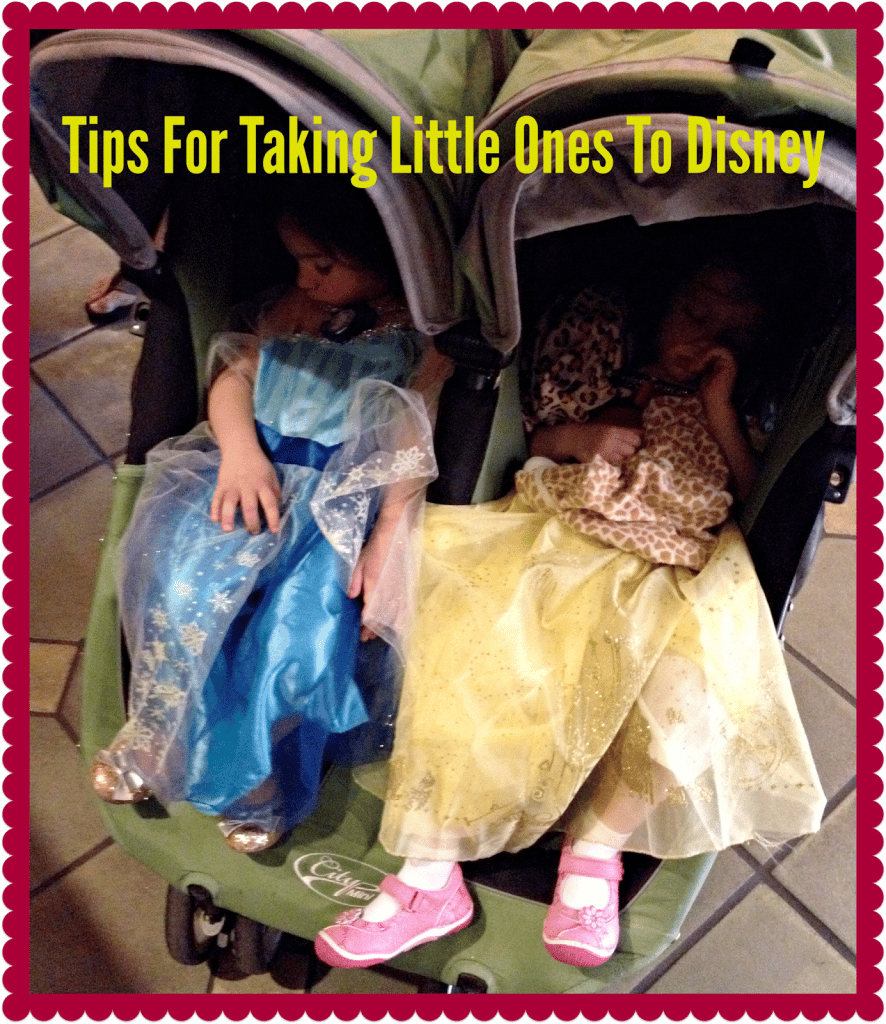 We survived the trip! I am happy to say we didn’t have one meltdown. We had only a few tears in the hotel room, and those were due to fashion issues we have at home too (princesses don’t wear socks, pants or long sleeves even if it’s 45 degrees). After our first Disney experience, I can still say I’d highly recommend taking little ones there on vacation. If you do, here’s a few tips:

10 Tips For Taking Little Ones To Disney World:

1. Plan for an unplanned trip

I know, that phrase sounds silly. But, a lot of planning goes into a trip to Disney World: reservations months in advance for character meals, booking your Fast Pass selections weeks in advance, etc. The important thing to remember when traveling anywhere with very young children, is you’re not always going to be able to stick to a plan. Example: neither of my kids nap anymore, but I had a feeling they might fall asleep while we were at Disney World. Alex fell asleep for 1 hour each day. BOTH times, it was during the exact hour we had our Fast Passes for rides. She didn’t know that or know what a Fast Pass was, she just knew she was tired. So, instead of waking her, Tom and I each used our Fast Pass to take Maggie on Peter Pan’s Flight. Alex might have missed out, but Maggie got a chance to go on an awesome ride twice! The 2nd day they both fell asleep as we walked through the gate into Epcot. We knew they must be really tired and instead of waking them to head to our “Fast Passed” ride, we let them sleep for an hour and Tom and I enjoyed a quite drink in the sun in Germany. It turned out that thanks to them sleeping through the first hour of Epcot = them wide awake and excited for the firework show later on. Be flexible and everything will work out!

We considered trying to save money and stay somewhere outside of the park. I am really glad we didn’t. We stayed at the Caribbean Beach Resort and it was awesome. Staying on property meant that the whole trip, from the shampoo with Mickey Mouse ears, to a Disney gift shop in the hotel, had some extra Disney Magic. The girls noticed every detail (yes, even the Mickey shampoo)! Having the shuttle to the parks,  right outside our door, was key. I would highly recommend Caribbean Beach Resort. A few things that made it perfect for little ones: the Pirate Ship Pool & water slides that were just for little kids, their playground, the food court and our favorite: roasting marshmallows on the beach every night!

Even if you think your kids are too old to nap in a stroller…. they will probably nap in a stroller in Disney World. We opted to rent a City Mini Double for the trip from Magic Strollers. This was a life saver. The seats were big enough for the girls to get comfy and fall asleep, they could easily hop in and out at each ride and there was a lot of storage for all the “gear” we took with us each day. Magic Strollers was awesome. They drop off the stroller at your resort and pick it up. It was easy and seamless. The stroller we got was very clean and looked brand new. Based on what I saw, I would not recommend renting one of the park strollers.

Even if your kids have given up napping at home, a nap at Disney World is key. Neither of my girls had napped for months before we went to Disney, but both napped each day we were there. Head back to the hotel midday for some down time and a rest or let them sleep in the stroller. This will also allow for happier kids at night for the fireworks!

We only spent two days in the parks (1 day in Magic Kingdom, 1/2 day in Hollywood Studios, followed by 1/2 day in Epcot). We did this because of our vacation budget and how much time my husband could take off of work. We also did it because I thought more than that would overwhelm my kids on their first trip. In the end: I am so glad this is how we did it. The 2 days in the park, with an extra 2 days at the pool was perfect for our kids. Someday, when they are older, we will go for a longer trip and see more, like Animal Kingdom and Blizzard Beach. For a trip with a 2 & 4 year old, 2 days was plenty. They were exhausted after those 2 days and we were too. We left seeing just enough of Disney World and before anyone started to melt down!

6. Head to the park extra prepared

Some things to be sure to pack daily for little ones: sunscreen, extra clothes, layers (it was colder than I thought at night!), plenty of pens for their autograph book, drinks, water bottles, snacks, and if they are into dressing up – a spare costume! Another thing we threw in the stroller (and i’m glad we did) were Alex’s lovies and binkys. I am not proud that my 2.5 year old still sleeps with a pacifier, but we usually keep it in the crib. Same with the lovie. I was a little nervous as to how Alex was going to react to the characters. I knew Maggie would run up to everyone, but Alex gets a little scared. To my surprise, Alex loved all the characters and rides, but needed her lovie by her side. I was totally fine with binky and lovie hanging out with us for 2 days straight. They were making Alex feel safe in a very big, crowded, overwhelming place. I am very glad we threw those into the stroller!

7. They will stay up later

I was hesitant to plan anything in the evening. At home, my kids are sound asleep at 6:30pm. I took a chance and booked dinner at 8pm one night, because it was all that was available. Not only did they stay up, totally happy for that dinner, but the night before they were still riding rides at Magic Kingdom at 10pm! Between the naps and being hyped up on Disney magic, they were wide awake. The park has late hours some night (like the night we spent at Magic Kingdom). The park was a lot less crowded at night, and we rode a ton of rides from about 8:30-10pm. It was also a ton of fun for them to see the castle lit up at night and get to “go on rides in the dark”.

Yes, you travel to Disney World to go to the parks, but if your kids are anything like mine, they will be just as excited to swim. The pools and playgrounds at the resorts are fun and geared towards kids. Make sure to leave plenty of time to enjoy some pool time. We did 2 days in the park and 2 days just at the pool. This also makes things more relaxed for mom & dad.

No one likes to wait in line. Two year olds really don’t like to wait in lines. You can’t avoid lines in Disney World, but just know ahead of time that this will be rough with little kids. There aren’t many ways around it, but some things that help: don’t get in line when everyone is hungry and definitely don’t get in line if someone is already on the verge of a meltdown.

10. Enjoy the magic through their eyes

If you head to Disney World with little ones, try to stop and really watch their reaction to things. It can be really tempting to rush around the park, make sure your on time for your Fast Passes and reservations, but seeing Disney World through a little one’s eyes is amazing. As they get older, they will still love Disney World, but they might not stop in amazement at each character they see, truly believing they’re “real”. I’ll share my favorite Disney moments tomorrow, but for now will say: traveling to Disney World with my kids while they were really little was a wonderful experience!