Disclosure: We partnered with Primary.com for this post. All ideas, costume designs and opinions are my own. 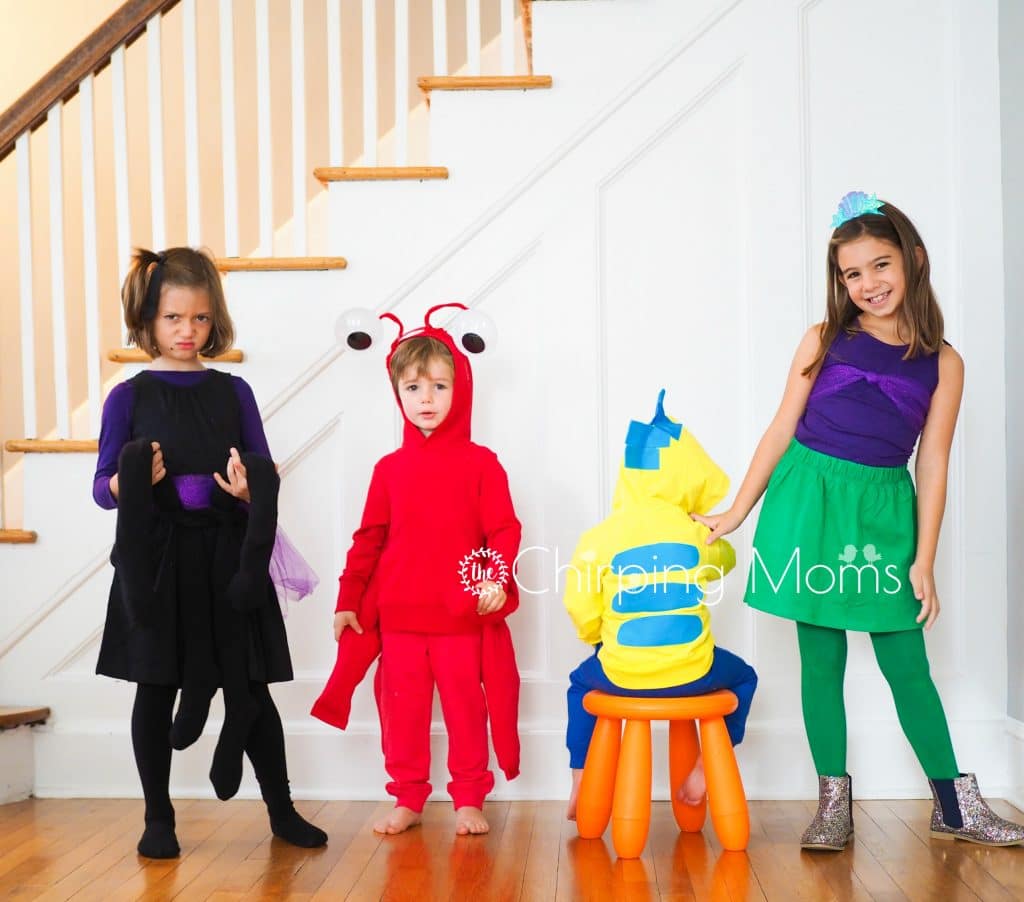 Here’s a fun group costume for friends or a family: the cast of The Little Mermaid! These DIY Little Mermaid costumes were easy, no sew and comfortable for the kids to wear. Best part: if you follow the directions below, your kids will be able to wear all the clothes after Halloween. We had a blast with this group costume and you better believe we were playing Under the Sea while we tried them on! All of the clothes for these costumes are from Primary.com. I linked to the specific items we used below. Here’s how we made easy DIY Little Mermaid Costumes: Ariel, DIY Ursula costume, Sebastian and Flounder. 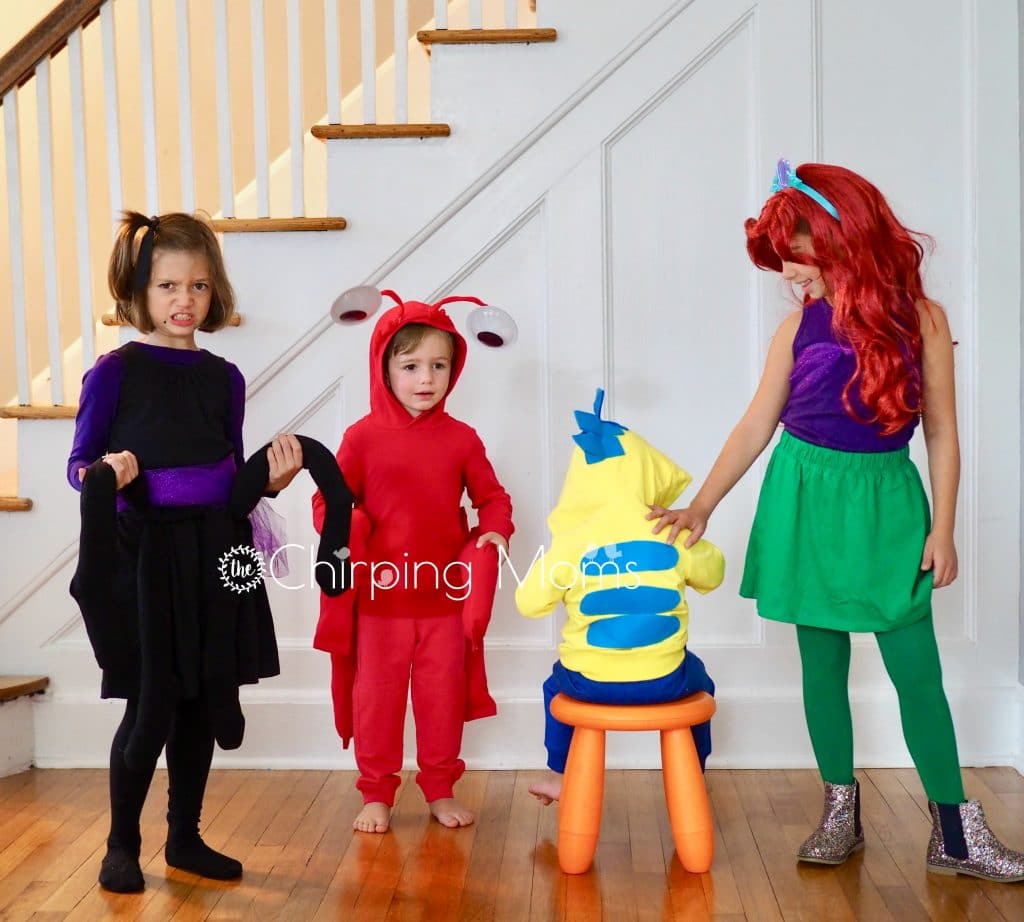 How to: We used the green tights and skirt combo to be our Ariel tail/fin. Over the purple tank, we tied a long strip of tulle around the top after knotting it in the middle. We then spread the tulle out to look like Ariel’s shell top. 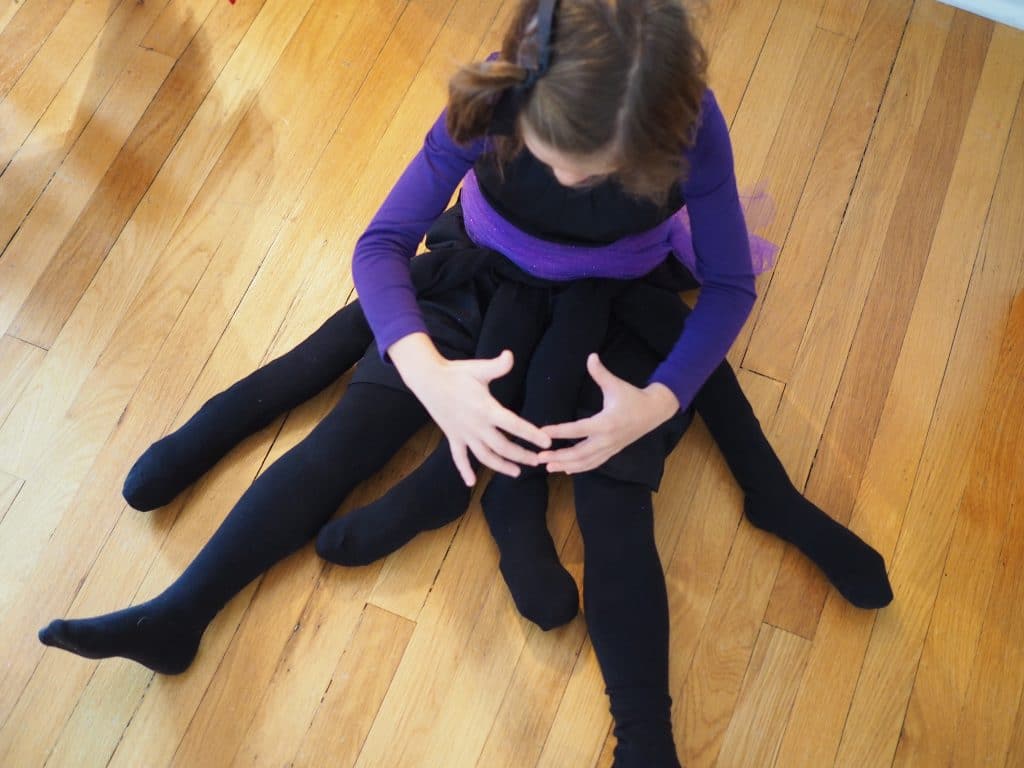 How to: Layer the purple long sleeve shirt under the tank dress. Wear one pair of black tights and stuff the other two with something lightweight (newspaper is good). You can stuff it with things like towels, other clothes, etc but then it gets a little too heavy to wear. Once the tights are stuffed a little past half way, tie them around the waist, letting them hang down as Ursula’s “other legs”. Repeat with the other pair of tights. Then, tie a belt of purple tulle around the waist (this helps cover where you have knotted the tights). It would be fun to add some Ursula face paint to this one too! 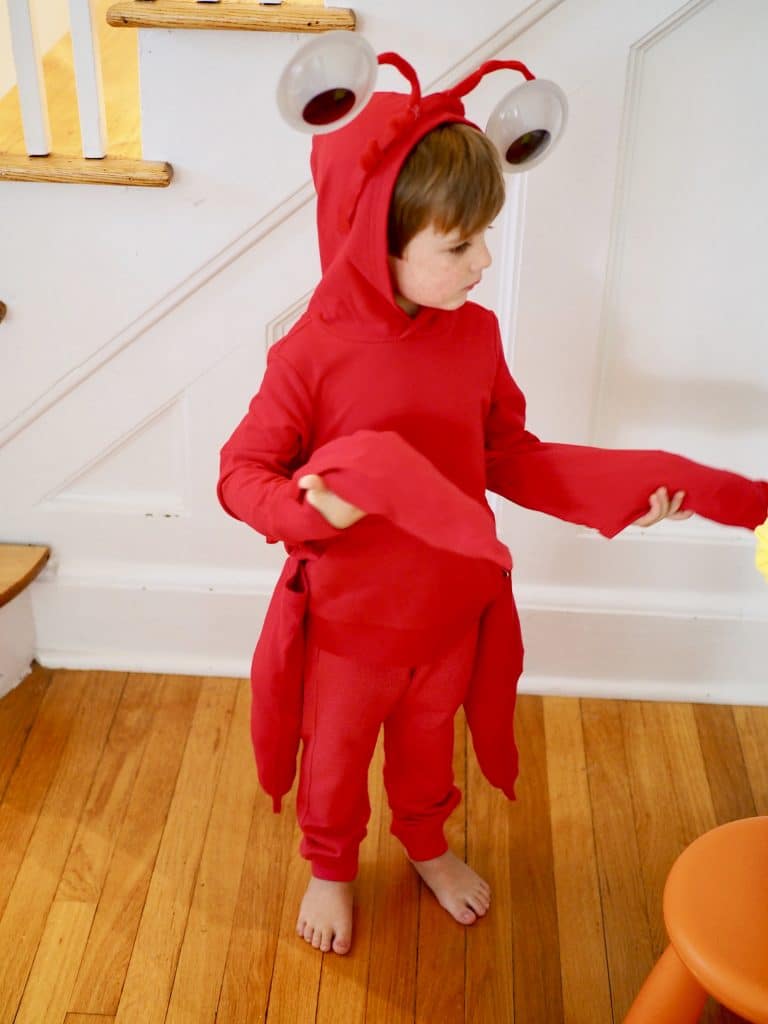 To make the extra legs for the crab: cut the baby leggings in half. Hot glue the bottom and sides. You should now have 4 red sleeves. Stuff them with something light. We stuffed them with a tshirt and they were a little too heavy. Like the Ursula legs, I’d suggest newspaper to make it lighter. Then, just safety pin them to the sweatshirt. You could sew them on to make them more secure, but my son loves this soft hooded sweatshirt and I knew he’d want to reuse it, so I used pins. For Sebastian’s eyes: Use a red headband or cover a white one with red ribbon. Then use hot glue to attach pipe cleaners to the large googly eyes. You’ll want 3-4 pipe cleaners per eye. Then twist them around the headband and you’re all set. 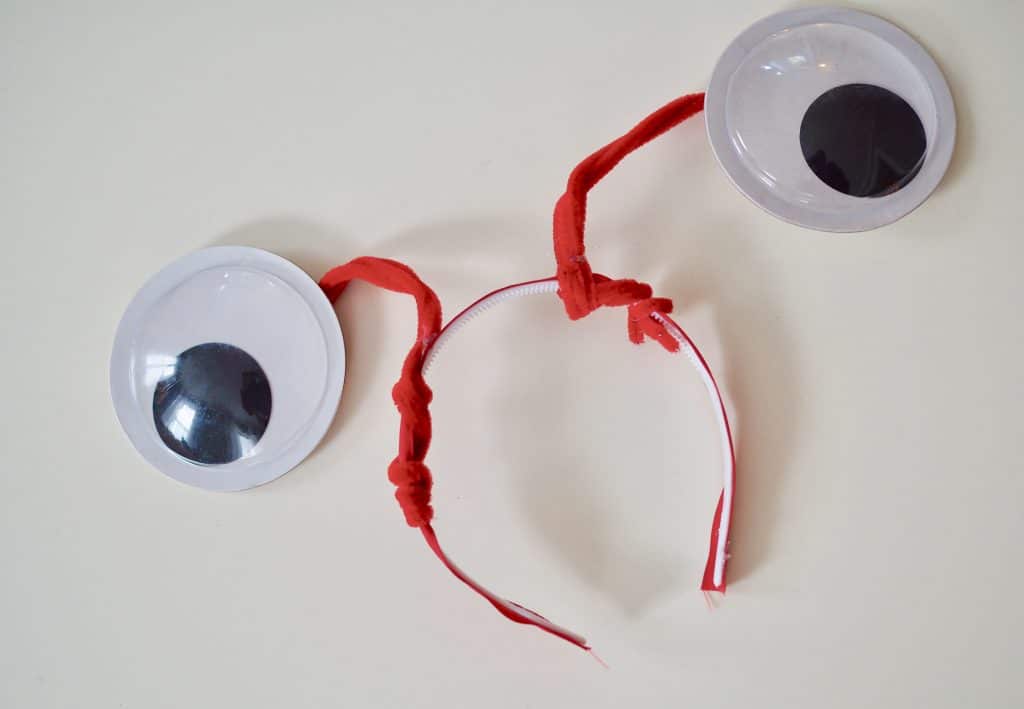 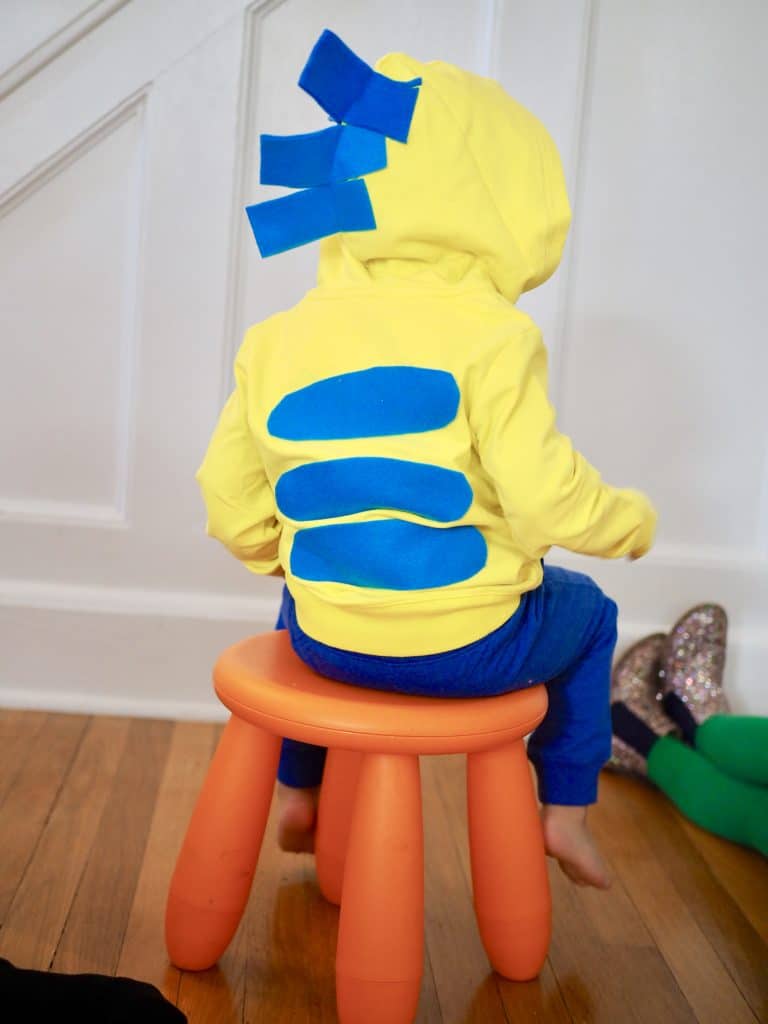 How to: This is the easiest costume! Cut 3 ovals from the sticky felt and stick them to the back of the hoodie. Then cute three long strips from the sticky felt. Fold the strip in half, stopping about 2 inches from the end. Use the end pieces to stick onto the hood. See photo below. Then Flounder is set! 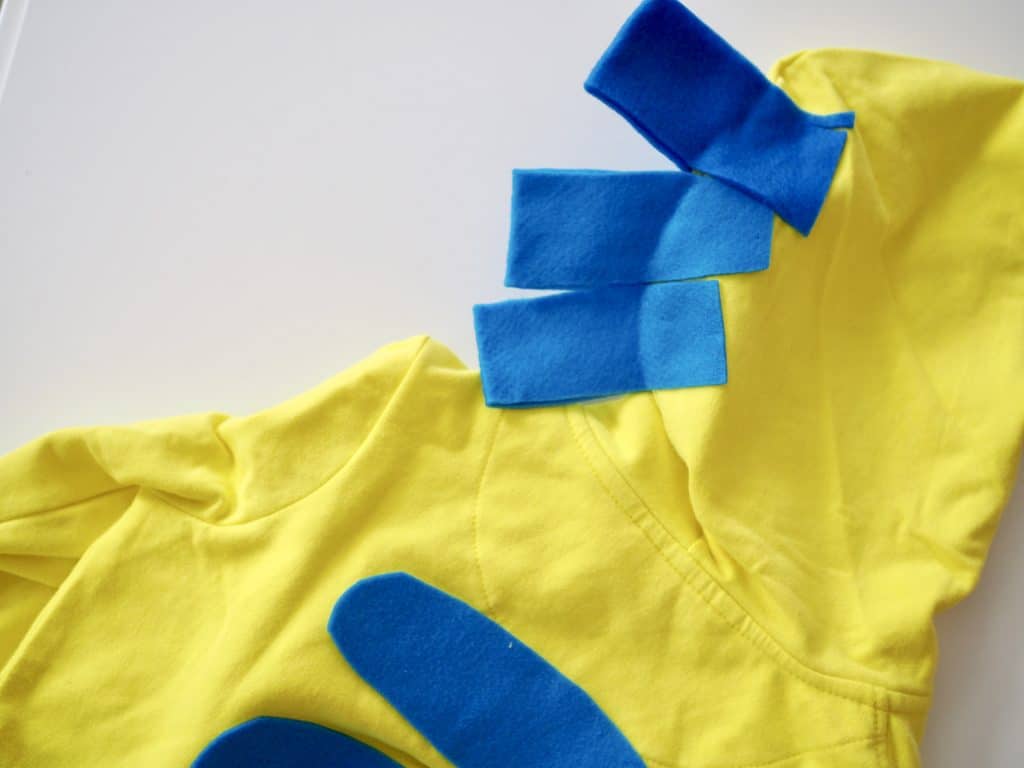