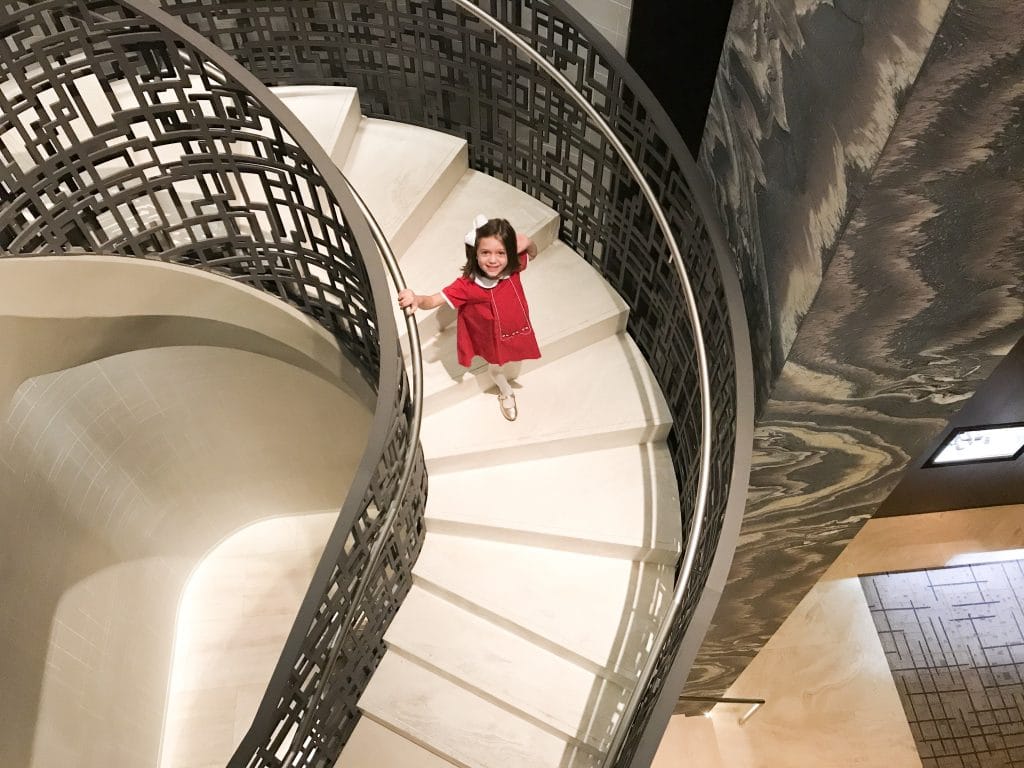 I’m trying to make a point to visit New York City more often now that the girls are getting to an age that they can really appreciate all of the wonderful things the city has to offer. I’m also going to make a point to write more about NYC because I feel people often ask for recommendations and I scramble to try and remember what we did where in the city. We are close enough to head in for day trips but every now and then it’s really fun to spend the night in the city. A few weeks I took the “big kids” to the city for the night. I was ready to explore Downtown New York City with kids. After I planned the trip I realized it had been a while since I spent time Downtown and never with the kids. Luckily I have some friends who live in the neighborhood with kids and they helped me plan.

Downtown is really a cool spot in the city to bring kids because it’s easy to get around and not crowded (not on a Sunday when we explored the area!). It was my favorite part of the city when I was a kid. My dad worked at the World Trade Center and we would go to work with him often. I can remember being Maggie and Alex’s age and walking around Downtown with my dad and cousins. This area of the city is where I have some of my favorite childhood memories and it was really special to get to spend time there with the girls. Now for the details of the adventure…. 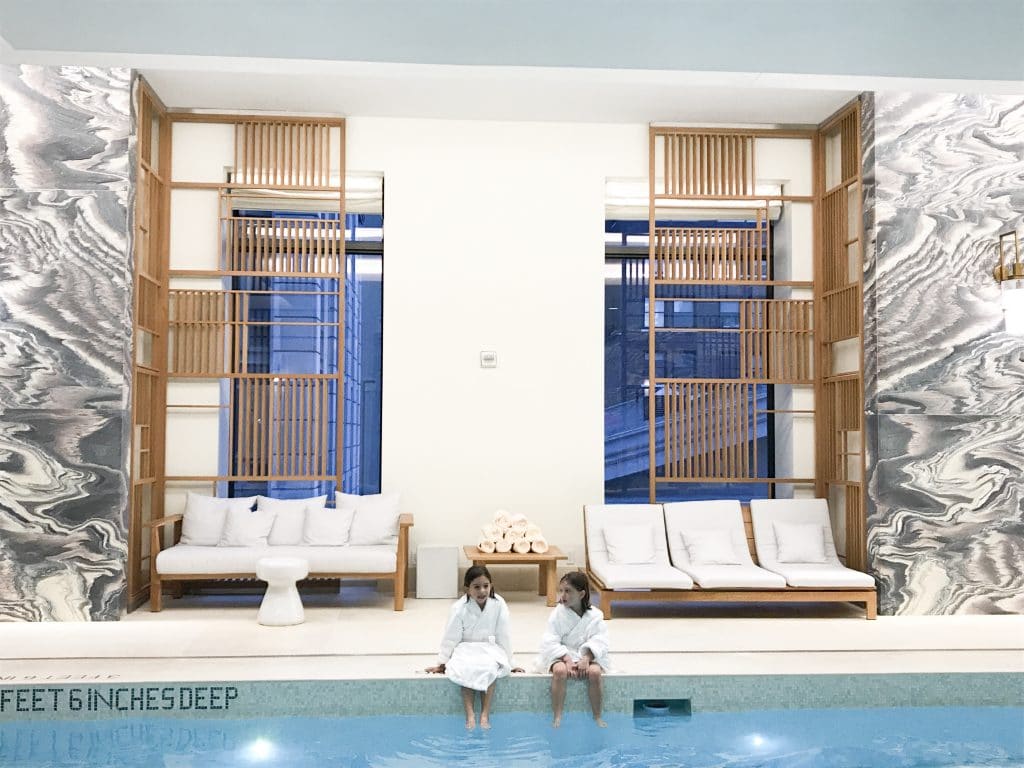 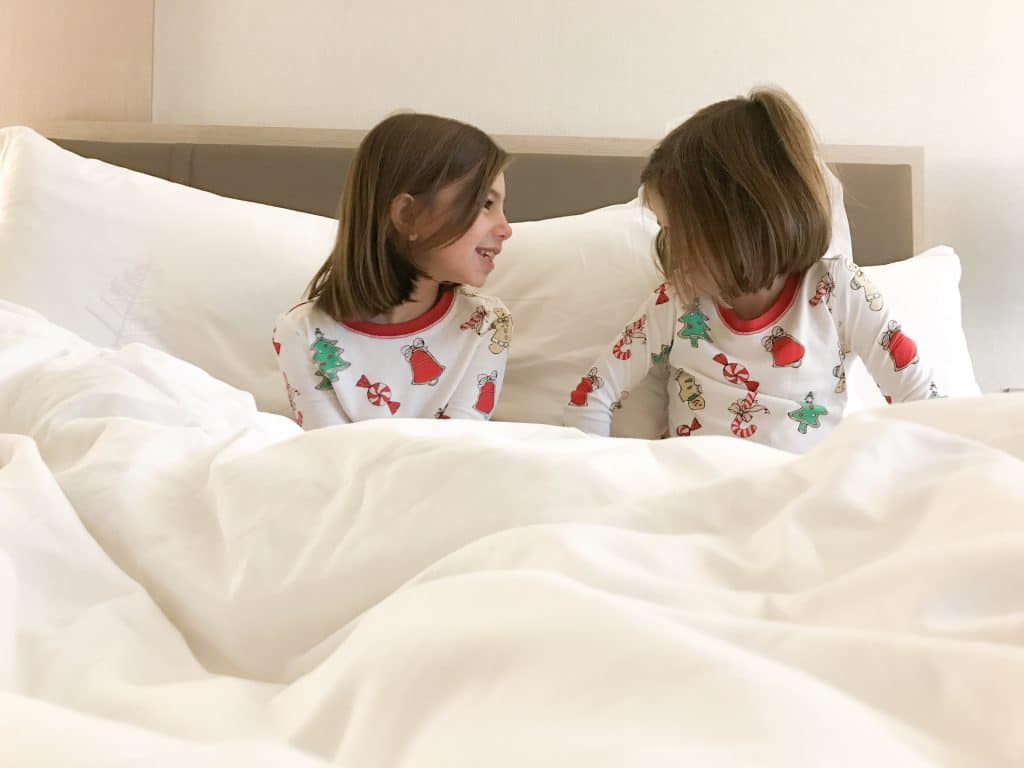 While it’s so much fun for kids to explore the city, they also like a little time to unwind. New York City is so much fun but can also be a little overwhelming to kids. The Four Seasons was a very quiet, relaxing spot for us to unwind in between sightseeing. There’s also an incredible indoor pool that is a blast for kids. 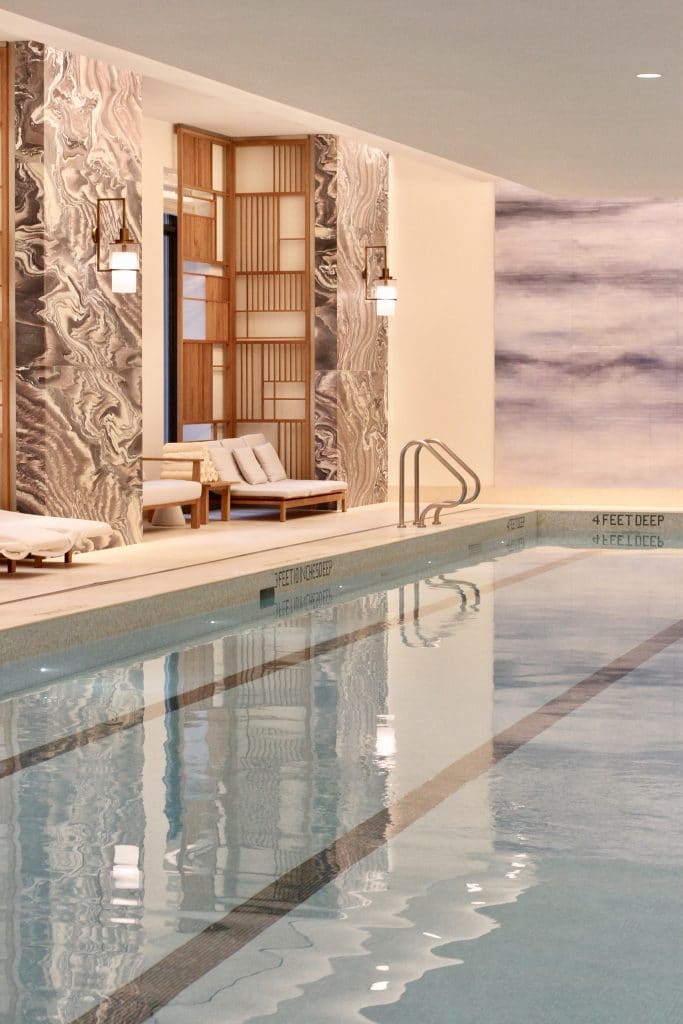 When we are traveling, I like to try and have one meal a day not at a restaurant if possible. The Four Seasons had a great in room breakfast with a kids menu my girls loved. They also loved that instead of rushing out the door in the morning, we spent time cuddled in our matching Four Seasons robes, enjoying breakfast. The staff was wonderful. They were all kind and patient with the kids and were so helpful in sharing all the area around the hotel had to offer. 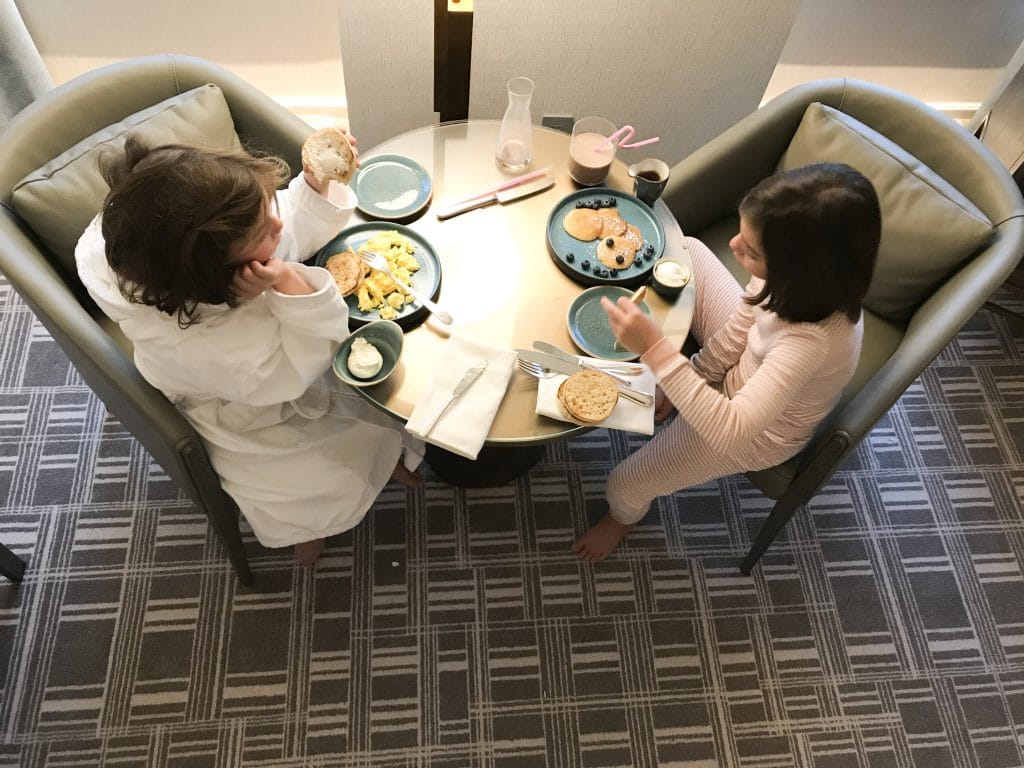 The Four Seasons Downtown has great views of the One World Trade Building. If you will be in New York City this holiday season, click here to see what the hotel has to offer this festive season!

Shake Shack: During our trip Downtown I took the girls to Shake Shack for their first time. They loved it! I guess what kid doesn’t love a burger and a milkshake? There’s a spot right near everything else on this list: Shake Shack Battery Park

Eataly Downtown: Eataly is one of my favorite spots in the city (both locations). I miss living in Italy and visiting Eataly reminds me of real markets and restaurants in Italy. It was the first time taking my kids and they absolutely loved it. They loved the food, the gelato and walking around “Italy” for a night while never leaving NYC.

Le District: If your kids enjoy Eataly and learning about Italy, let them discover a little bit of France too at Le District! 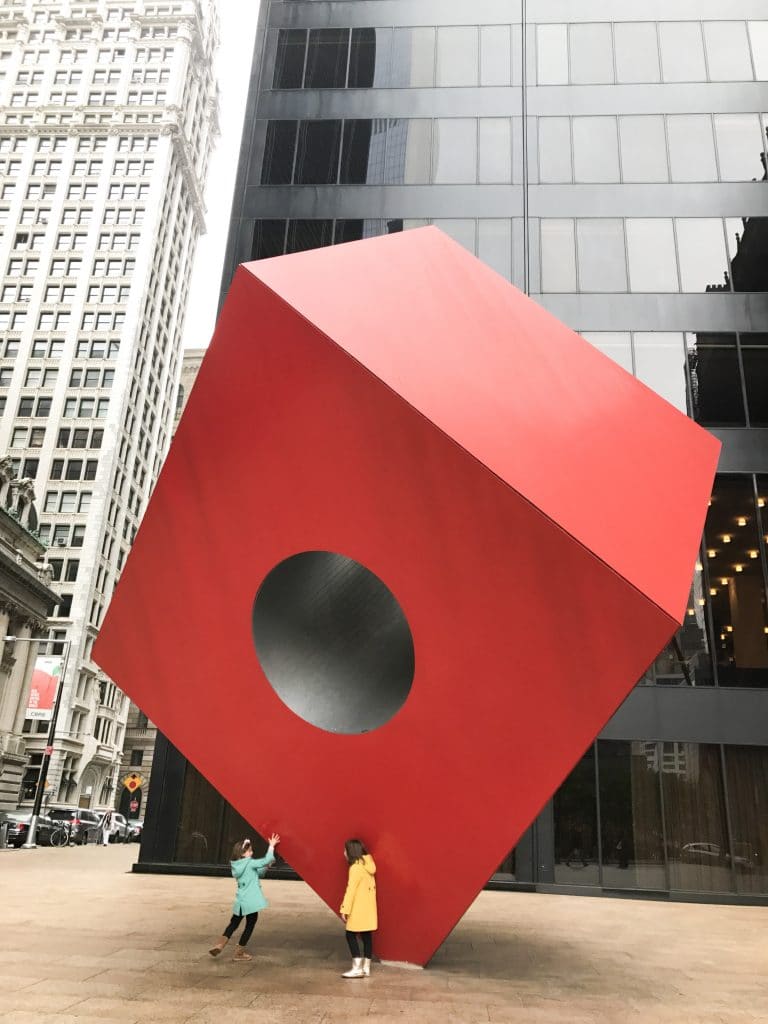 What to See & Do, Downtown New York City

Battery Park: I forgot how much I liked this park! It’s a really nice park right along with water. There are great views and they are currently building a new playground.

SeaGlass Carousel: So this is one of those NYC spots that I had heard of for a while but for some reason thought it was going to be an over priced, over crowded tourist trap… It’s not! I am so glad we finally went. The SeaGlass Carousel was not crowded, was very inexpensive and it’s really beautiful and so much fun. We just walked right up, bought tickets and hopped on. The ride is also a lot more fun than a regular carousel. The fish go up and down and it feels like they are floating around to the pretty, peaceful music that plays. After we ran around the park a little more, the girls ended up going for a 2nd ride on the carousel. It’s right in Battery Park and you really can’t miss it. It’s a circular green building in the park as you walk near the Statue of Liberty ferries. 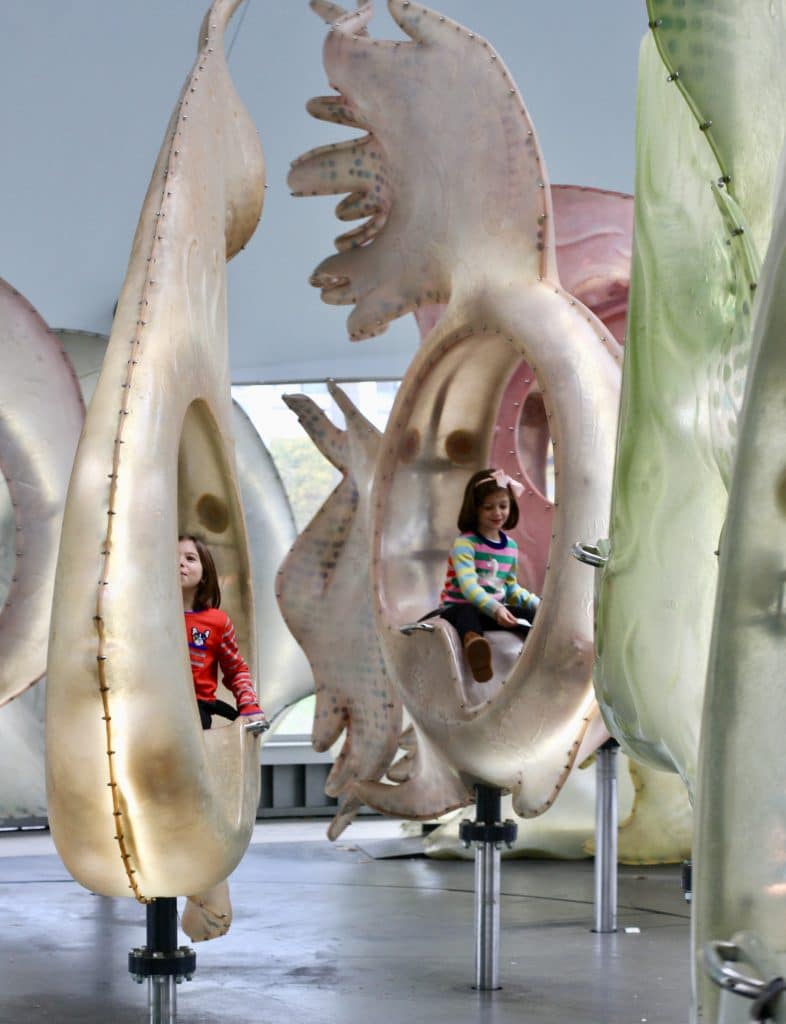 Statue of Liberty: From Downtown New York City you can see the Statue of Liberty. You can also hop a ferry to visit (Ellis Island too) If the kids have never seen it, this is a great spot to show them. It was pretty over cast when we were there and had a lot planned for the day, so we didn’t take the ferry ride. My girls were just thrilled with the view they had of the Statue of Liberty from Battery Park. 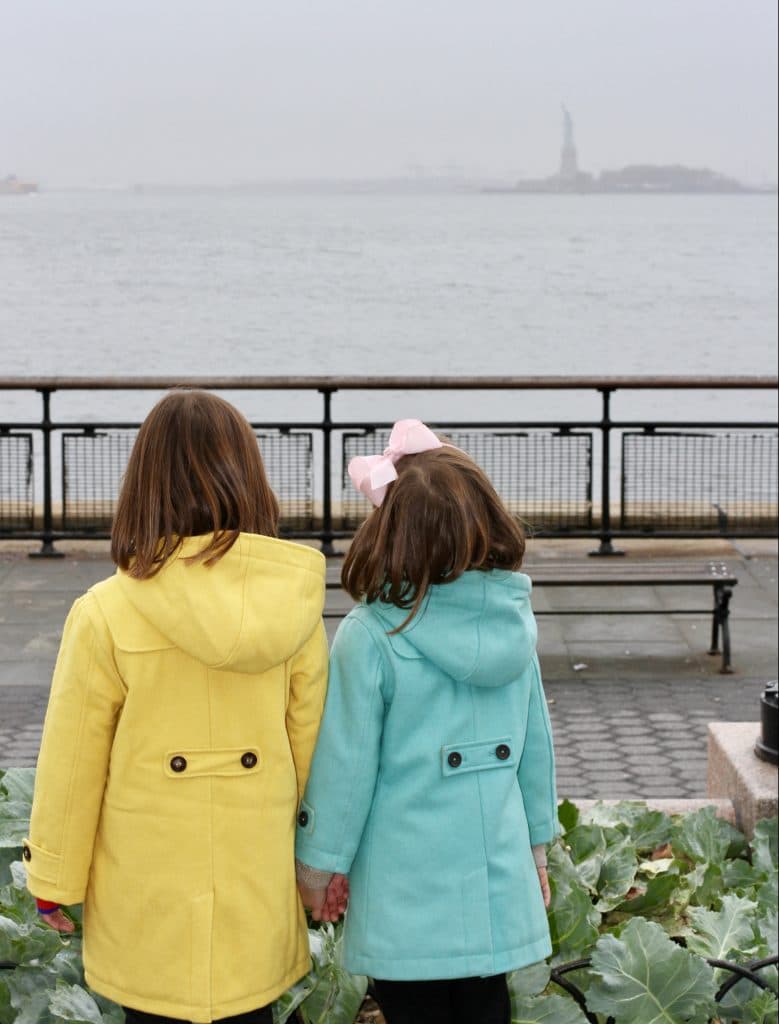 Charging Bull and Fearless Girl: Take the kids for a walk down Broadway! You’ll be in the heart of the Financial District and can stop and see the giant Charging Bull statue and the statue of the Fearless Girl. My girls loved seeing these two statues and thought it was so cool that they are in the middle of the street.

Ice skating: If you are visiting Downtown New York City with kids during the winter be sure to check out The Rink at Brookfield Place for ice skating. Check out their site for hours and other info. 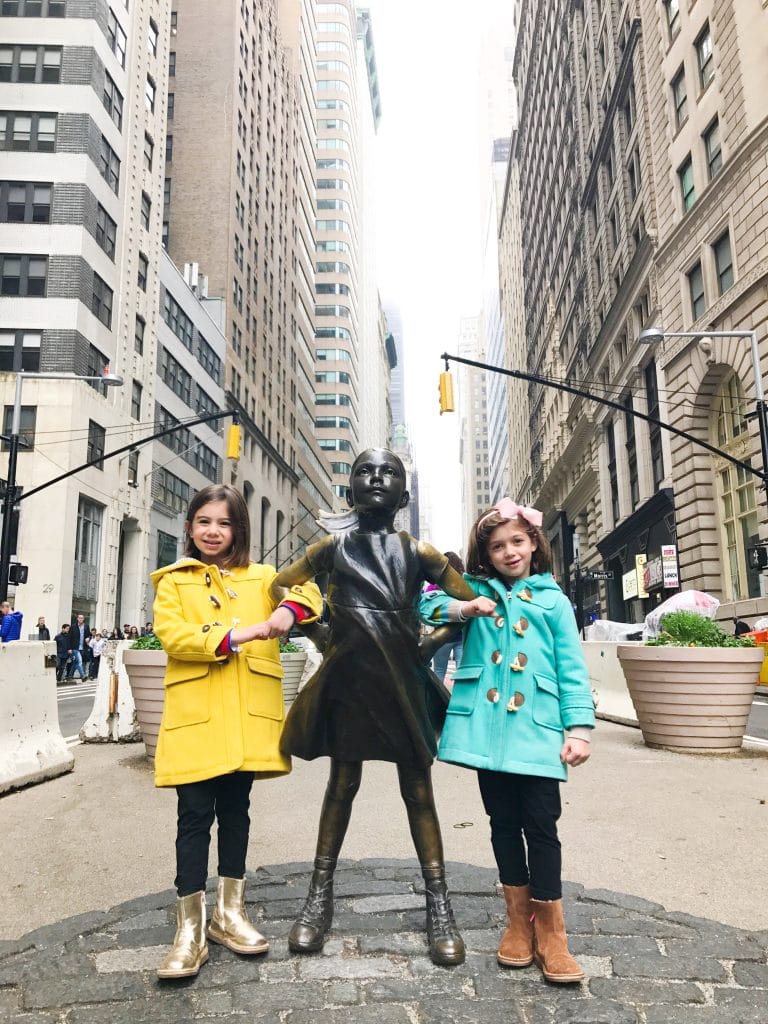 9/11 Memorial and Museum: Both the museum and the memorial are beautiful tributes and special places to visit. Depending on the ages of the children, you may want to just do the outdoor memorial. The twin memorial pools honor those that were lost and are really a peaceful place in the city and a special thing for kids to see.

One World Observatory: One World Trade Center is the main building of the rebuilt World Trade Center.  It is the tallest building in the Western Hemisphere, and the 6th-tallest building in the world. One World Observatory is at the top! You can buy tickets to ride to the top. The views are incredible and they have some neat things going on for kids for the holidays. Check out their site for details and to make reservations. 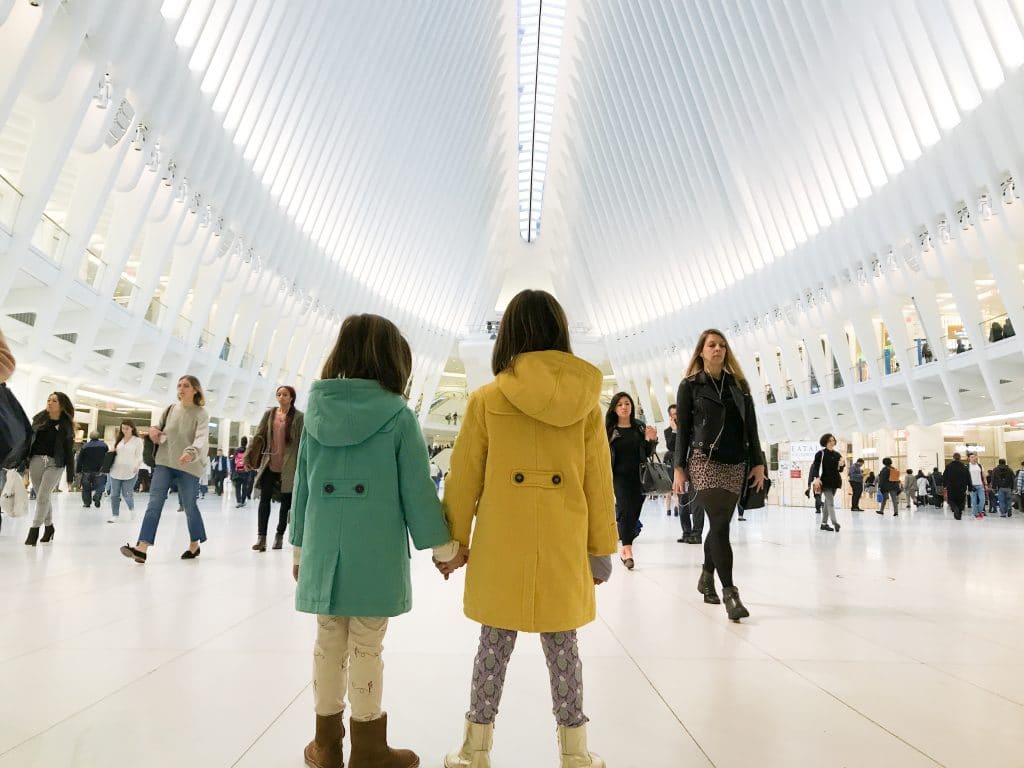 The Oculus: The Oculus is the World Trade Center’s transportation hub and also a shopping mall. You can also access Eataly through the Oculus. Even is you are not using it for transportation or shopping, it’s really a cool site for kids. One my girls said it’s what they picture the inside of a space ship looking like! 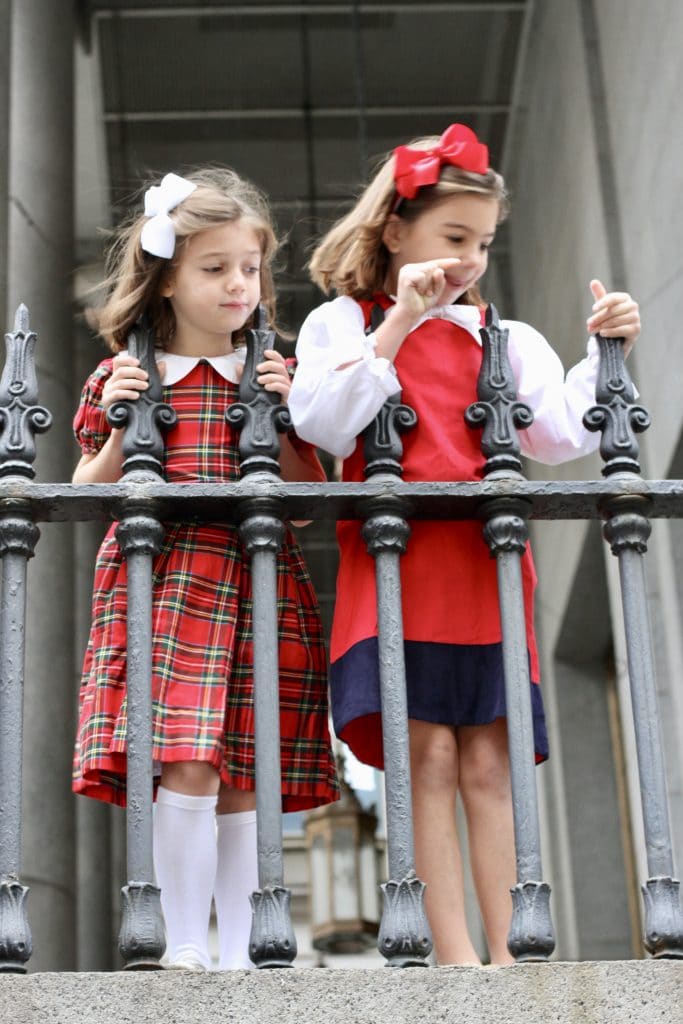