Today, I’m honored to have one of my longtime friends guest posting: Kim LiCalzi. Kim & I met years ago while studying abroad in Italy. We’ve stayed in touch & now enjoy chatting about life with little girls. Her sweet little baby will be one this spring.

My daughter, Colette, turned ten months a few days ago.  For some reason ten months hit me hard.  Double digits! Almost one!  I started to really reflect on how much she has grown up and how different life is.

My daughter has aged ten months and I feel like I have aged ten years. 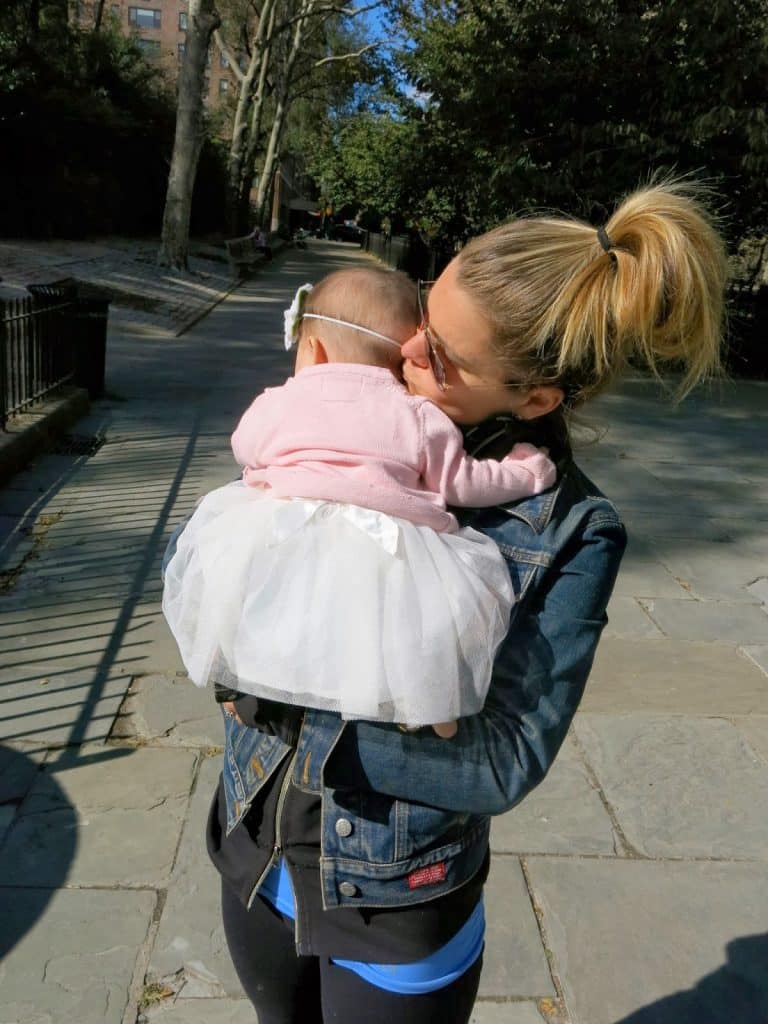 I think a lot about my “former self,” the loss of independence and the ability to make decisions based solely on myself.  I even have fantasies about walking into Equinox, throwing my stuff in a locker, watching TV on the stairmaster, running on the treadmill, maybe some mat exercises or just roll around on a yoga ball like I did when I was pregnant.  I used to drag myself to the gym after work.  I was constantly texting my friends, “I really don’t feel like the gym.  I guess I’ll force myself.”  Then I would follow up with, “I don’t know why I bothered I’m basically walking on the elliptical.”  And now, ten months later, I fantasize about the place.

For whatever reason, the gym (specifically Equinox with their heavenly eucalyptus scented towels) has become a symbol of who I used to be. It symbolizes that time when I would wake up when I felt like it on Saturdays, head to the gym, grab a smoothie, and meet my husband for lunch.  Maybe later that day we would hop on a bus and head downtown to shop or try a fantastic new food truck.

My husband is constantly telling me that we can still do these things.  And he is right to a point.  Now a trip downtown would involve working around nap and feeding schedules, deciding which stroller to bring, what to dress her in, what toys to bring.  And the list goes on.

I was talking to a friend of mine who has a daughter Colette’s age and I think she nailed it when she said, “being a mom is all consuming.” That’s why nothing is the same anymore.  That’s why I have this memory of my former-self skipping off for a selfish afternoon. I am now responsible for another being and my life is no longer my own.

But with this death of my former self there is the birth of something new.  The birth of my daughter, who was once a kitten sleeping on my chest, and now a little girl exploring her world with a passion that is exquisite to watch.  And the birth of our relationship that is something bigger and more beautiful than I ever was.

And at ten months, Colette reminded me of this by getting her groove on.  After months of Little Maestros, dancing to The Beatles with her in my arms, and giving her countless private performances for a giggle, Colette has finally started to shake it.  One of her new favorite things to do is to pull herself up, wiggle, and bop.  And this moment is everything.

This new life of mine comes with missed manicures, endless worry, skipped naps, toys scattered in a once pristine apartment, and tantrums.  But also, dancing.