I swore I was going to document more of this pregnancy. Even after being pregnant many times I forget so much. But here I am 2nd trimester ending, finally doing post 1. Maybe I’ll be better with newborn posts (since I can’t remember when any of my 4 kids spent through the night, took a bottle or rolled over). Time flies people. Ok, so here’s a recap of the start of a 5th pregnancy….

I found out about a week after 4th of July that I was pregnant. I was mid trying out the “FASTer Way” diet/workout and had been feeling really great (lots of energy, trying new foods etc) and was able to “sort of” keep up with it for the first week or so I knew I was pregnant. I thought maybe this would be the first pregnancy sans morning sickness… not a chance. I have progressively gotten sicker with each pregnancy and this one was no different. It hit me like a ton of bricks… BUT it seemed to be exactly the same length of time each morning as in the past so my hopes were that it would end after the first trimester like the others. Until early afternoon, pretty much the only things I could stomach were LaCroix, super cold ice water and Eggo waffles. I lived off of frozen waffles and felt like Eleven from Stranger Things.

Fresh air helped which was good because we started every morning at our pool club at 8:45 AM. Swim team for the girls and then swim lessons for the boys (and me praying I wouldn’t have to visit the locker room too many times).

By the end of the month I was feeling pretty terrible and was not sure how I was going to travel to Anguilla via plane and boat (in addition to morning sickness I get major motion sickness all the time). Thankfully I told my doctor and she gave me something to take. The trip was fabulous, minus no island cocktails ha. Right around 11 weeks the morning sickness ended, which is when it ended every single time! 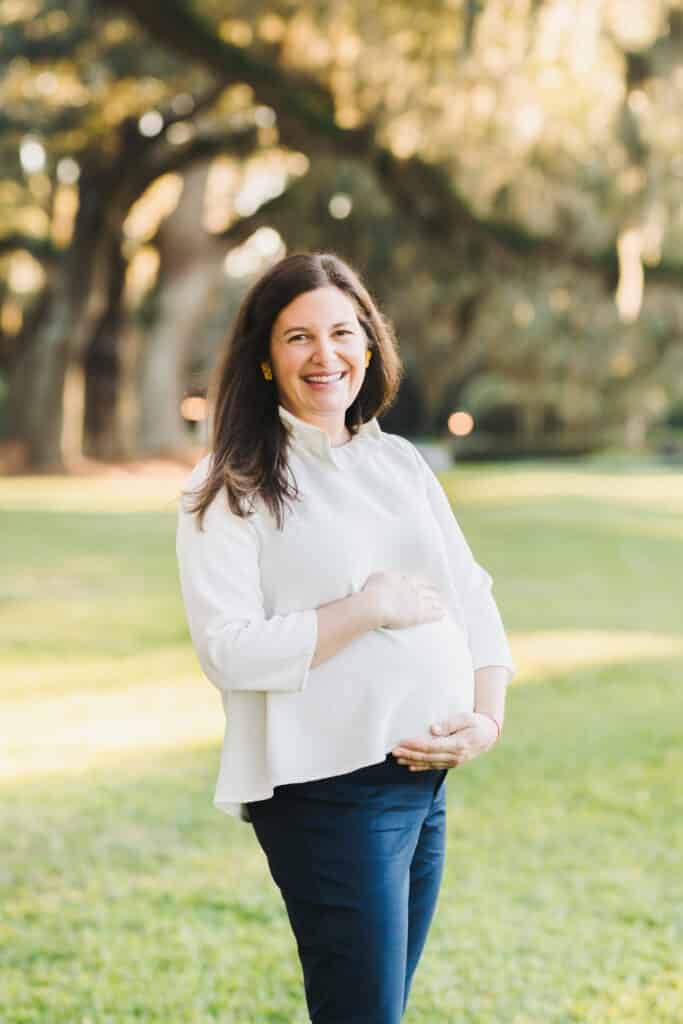 It was really hard to keep it a secret from the kids this time, mainly the girls. They were a lot younger and less aware of our conversations 4 years ago. We were trying to wait as long as possible to tell them. I was SO excited to share the news but also nervous. Someday I’ll write more about this (still not quite able to put all the feelings down, even a year later) but last winter I experienced my first miscarriage. Through the heartache of the experience, I thought often how I can’t imagine having to share that news with my kids. So we waited quite a while to tell them the news and therefore most other people… because if I am talking about anything with other people… my kids chime in! It wasn’t easy but sharing the news with them was the BEST.

The kids knew, everyone else knew and good thing… because I suddenly looked very pregnant. After a super sick summer I was ready for a fun fall, feeling better. There were times I felt some major mom guilt about how horrendous I felt all summer. I felt like there were so many days where I just wanted to watch a movie with the kids in the air conditioning, I yelled too much and said “no” to often. But soon after I started feeling better and the 2nd trimester began, I got my “end of June-end of September” video from my Isbell Films subscription (best investment ever). Sharing it here for 2 reasons: ditch the mom guilt when you’re pregnant ladies… you’re growing them another sibling. I look at this video and think “we had a darn fun summer!” and also sharing because it’s pretty much my exact first trimester with the finale being the kids finding out the news.

More on the 2nd trimester:

Main cravings: cigarettes and beer. This is the 2nd pregnancy of 5 where that is all I crave. I am still waiting to find another person that this has happened to. NO I don’t give in to the cravings. I recently found out I have low iron… which sometimes causes Pica, so I’m chalking this up to cigarettes being a “non food” craving and not that my baby is going to be a wild party animal. I have never smoked in my life and beer is never my drink of choice… but the craving is so strong that I actually ENJOY walking by a smoker on the street and smelling cigarette smoke.

On the flip side… the only FOOD I crave is yogurt with granola, honey and fruit… I could eat that everyday, which sounds a lot healthier than the cigarettes right?

The 2nd trimester was the same as the last pregnancies as far as: lots of energy, good skin and good hair. I savor the good hair because I know it’s all going to fall out after the baby arrives. Mid 2nd trimester I went on my first solo flight with the 4 kids… if you ever want someone to look at you like you’re totally nuts, board a plane, visibly pregnant with no other adults and 4 kids in tow. While we were away, I had some photos of the kids taken and the photographer had me hop in a few. I’m thankful she did because they might be the only 2nd trimester photos I have! It’s the photo in this post (credit: Rainey Gregg Photography).

Something new! While I have felt the same this 2nd trimester as I have with the rest, I tried something new: a mindful pregnancy and birthing class at my friend’s yoga studio, Home Power Yoga. It was absolutely wonderful and all I can say is I WISH I did it 10 years ago before my 1st baby. I’ll have to write a whole post after I try some of the tips during this birth but it was the most relaxing, inspiring night. I did the class a week before Christmas and it was a real gift to me and the baby.

A fun thing with this 2nd trimester is the responses from strangers when they find out my pregnant belly is carrying a 5th baby. When I’m out with all 4 kids and people see me pregnant… most people are most curious if the 4 in tow are “all mine as well”. Or the ones that see my belly and then like to count the other ones out loud, very loudly. The people most excited by the sight of us are people over 75. I guess 1945 was the last time it was popular to have more than 4 kids… The 75+ crew gets such joy and tells us all about the “big families” they grew up with.  My favorite is when I am alone and get the “aww, 1st baby?” when they see my belly…. and then I respond “no, 5th”.

Now, 3rd trimester is here… and before we know it baby will be too. One final pregnancy update coming next month!