Today we’re sharing an adorable birthday party idea for boys (or girls!). This Peter Pan birthday party was so much fun for all of the kids and turned out so cute. 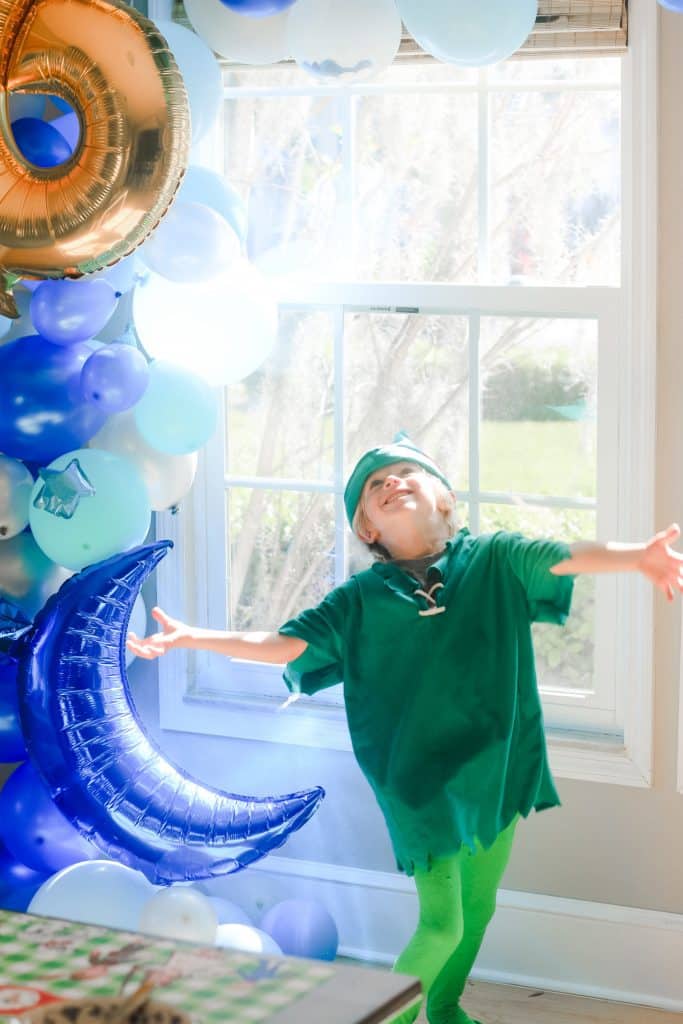 Initially Tuck wanted a pirate party… which I wasn’t super pumped about planning… but I knew pirates wasn’t so bad. One day it’ll for sure be Pokemon. But then my friend showed me pictures of her Peter Pan birthday party she threw for her son, and once I told Tuck the idea, he was allll about it. I started planning the week of Christmas, so some of these details were pretty thrown together. This party is brought to you, mostly, by Amazon. And some amazing artists which gave it that sweet nostalgic vibe I was going for – tricia Lowenfield and Paper Please.

We went with 2-4 timing, which actually went until just after 6. Which is a sign lots of people were having fun! I went with this timing truthfully because I didn’t want to have to deal with a meal. I do like to cook, but cooking for a crowd (we had 85!) stresses me out. Last year for his farmer birthday we were up until what felt like midnight making breakfast for everyone. Since 2-4 is snacktime, here’s what I got for food … all from costco (: : Shrimp + cocktail sauce, Veggies and dip, sandwiches, uncrustables, fruit skewers, cookies, mini muffins, made good mini bags of granola, pirates booty, “cannonballs” which were pretzel balls, apple slices, yogurts, chocolate milk! 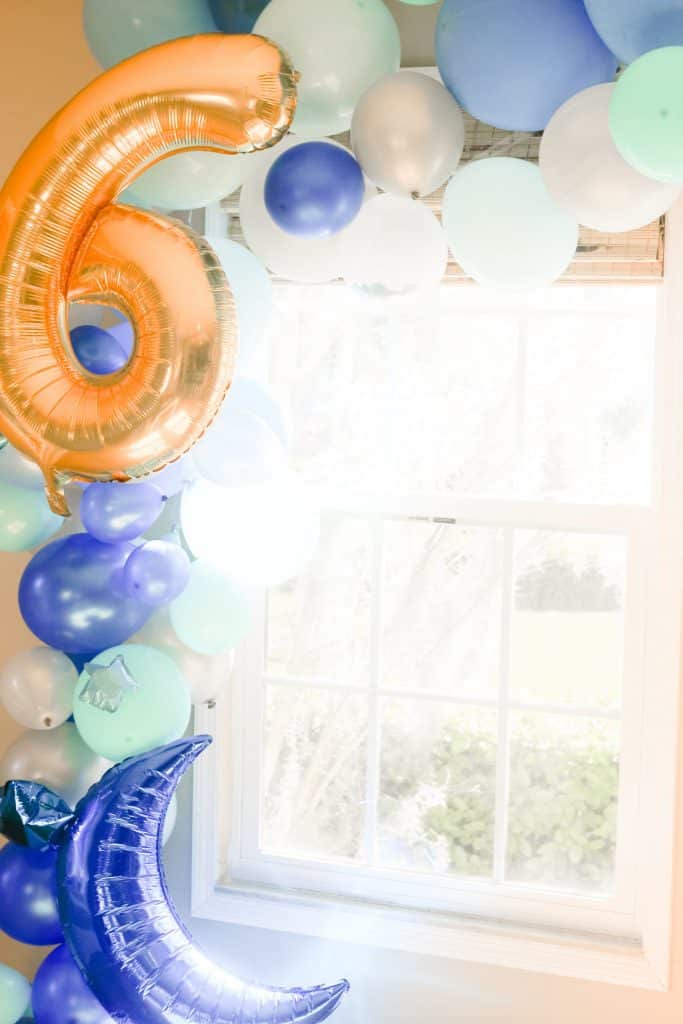 The balloon backdrop took about an hour to make from one of these kits. They also have pink! I would highly suggest using an electric pump. Happy to let anyone local borrow it! It took me an hour to create and I made it the day before. It is about as frustrating as building legos can be for me. haha. At the end I added the mylar SIX, and then some star mylar balloons too. 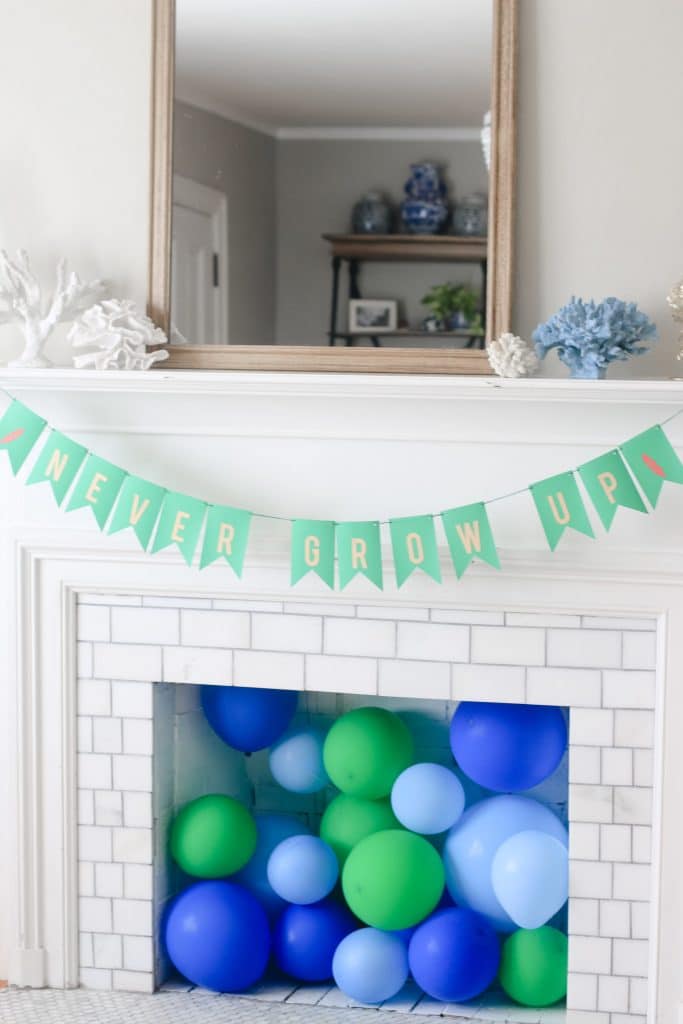 Heather made the adorable sign (message her for purchase or download), and tricia Lowenfield created that adorable sticker.

The never grow up sign is from Etsy. And I just used the left over balloons and hot glued them so they all stuck together! 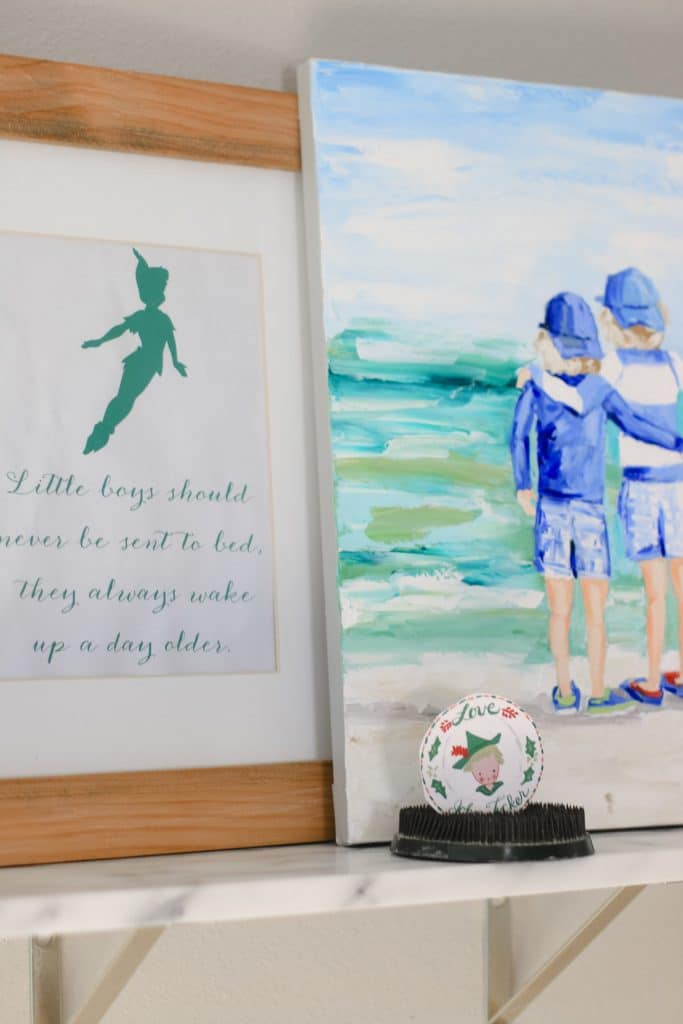 For the goody bags, I stuck a tricia lowenfield sticker on white bags (bought at the dollar store) and included a peter pan golden book, some pirate tattoos, a ring pop (treasure!), and pirate’s booty. 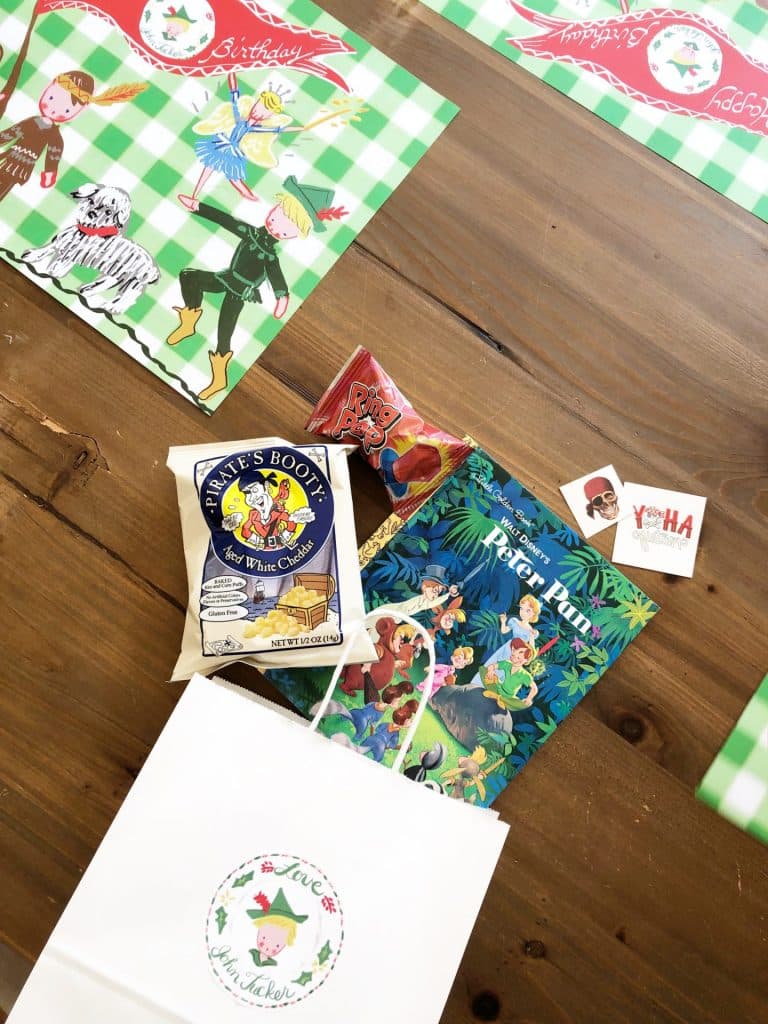 While no one had to dress up. Dressing up was certainly encouraged! I bought the wings and pirate gear from the dollar store. I found the fairy wands and flower crowns on Amazon. I loved seeing so many get into character. 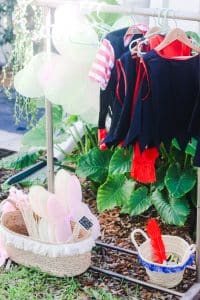 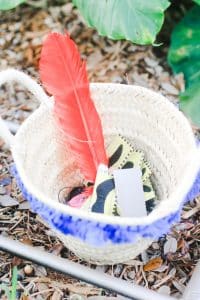 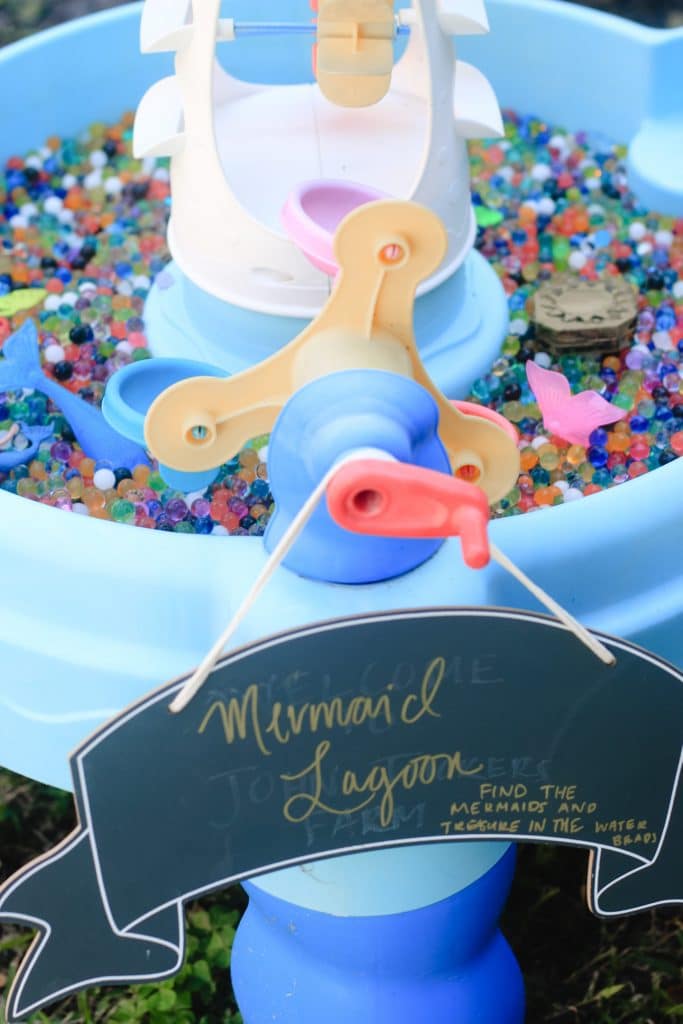 The mermaid lagoon was a hit. I hid little plastic mermaids in our water table with some treasures, along with the sooper beads. It was a fun little sensory activity!

I bought this pirate ship at Target the week before the party. I love antsy pants products! 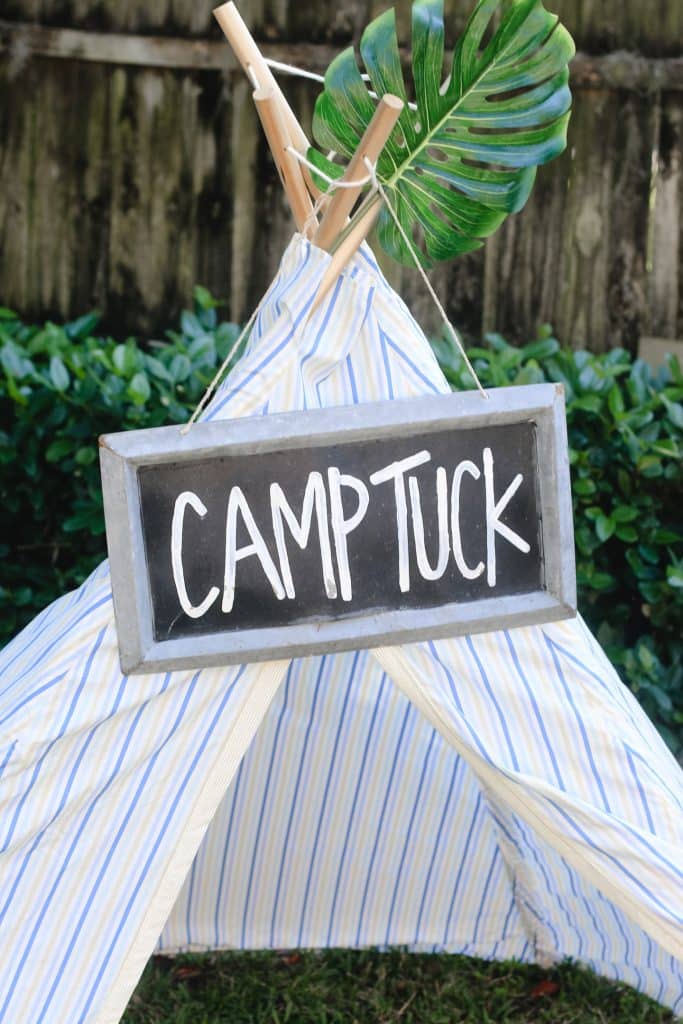 The indian camp was a Beaufort Bonnet Fun Fort (this print is last years)+ an old sign Shannon made. 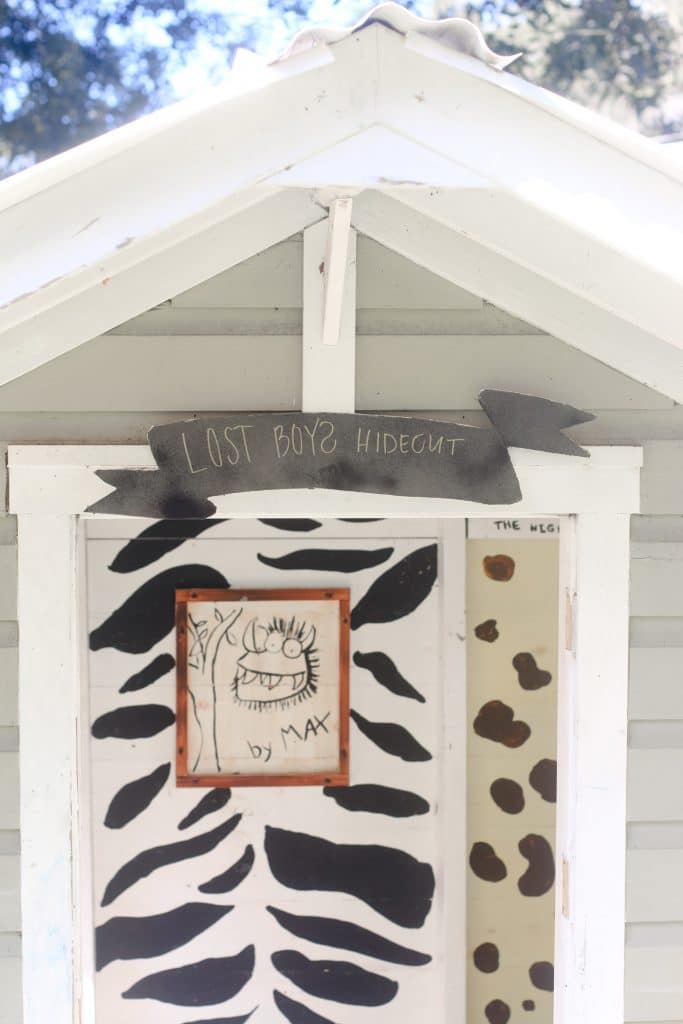 This little sign was from a wedding I did in 2014. I spray painted it black, and turned the playhouse into the lost boys hideout. 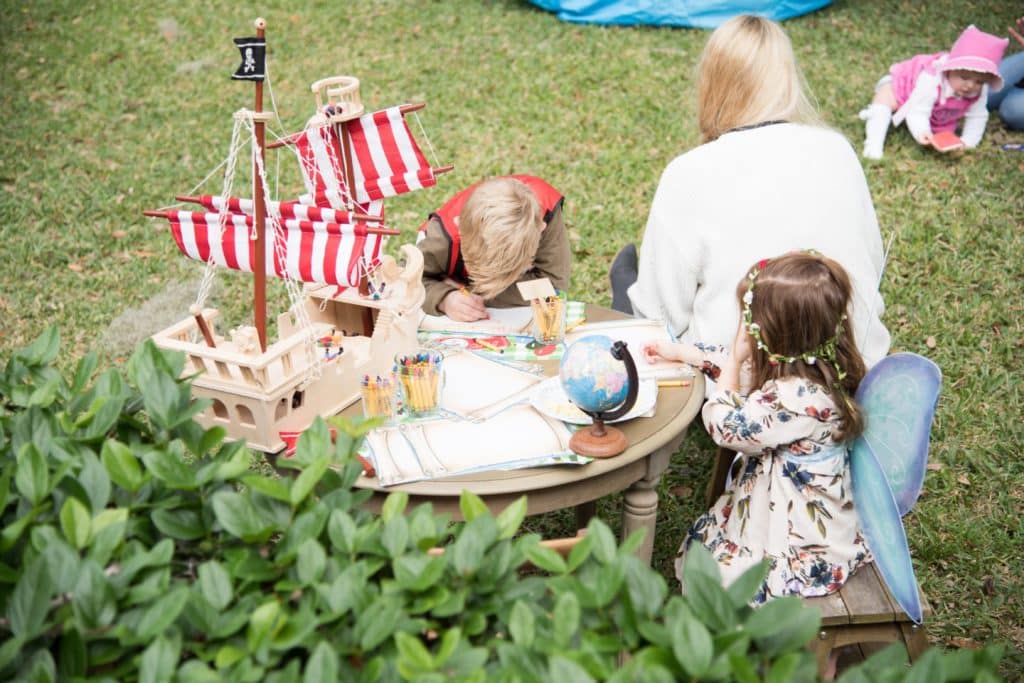 We also had their table set outside with crayons and blank treasure maps where kids could color.

this pirate ship pinata was fun! Tuck took it down in a couple swings though, so the other kids didn’t get a turn: ( 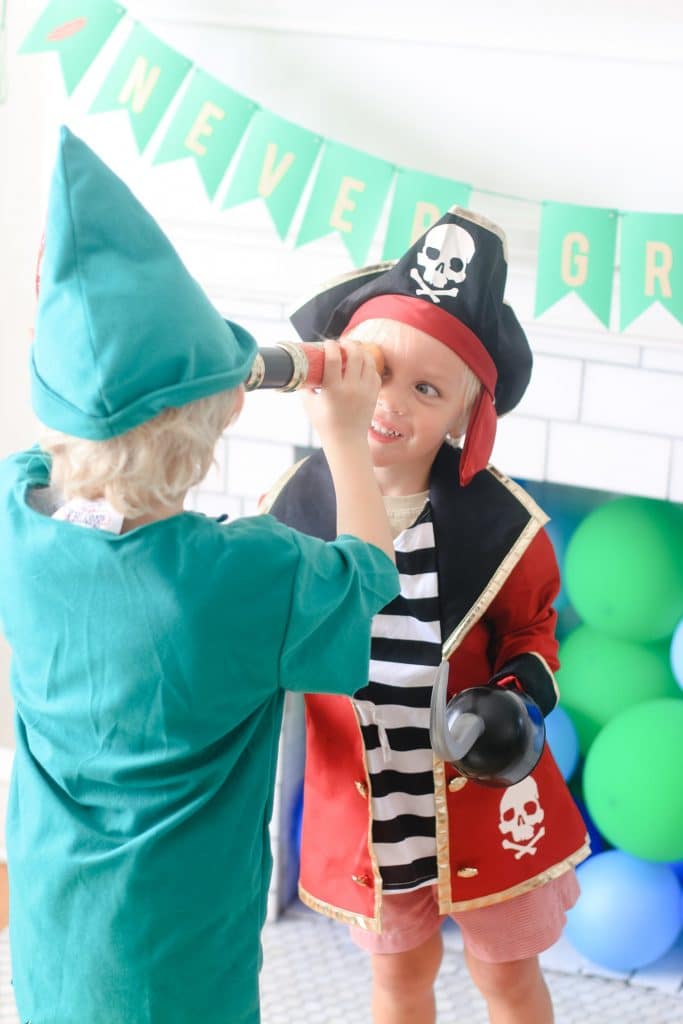 We had the music from Peter Pan playing throughout the party. I also turned on Peter Pan in the playroom for anyone who needed a break from the madness. The mad dash for the prizes and candy after the pinata broke. 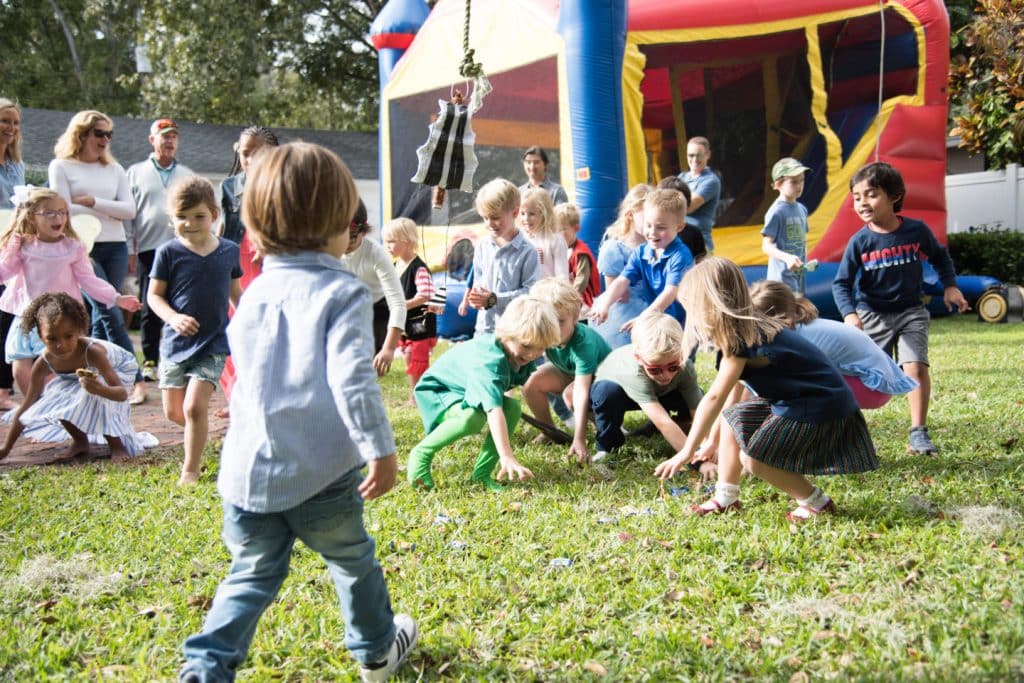 We also did a bounce house combo through obies. I had a pirate shipped on order with another company but they never confirmed, so last minute Obies swooped in and saved the day. The combo had a slide and a basketball hoop. Kids were always packed in there.

Other ideas that I thought about but wasn’t able to complete: 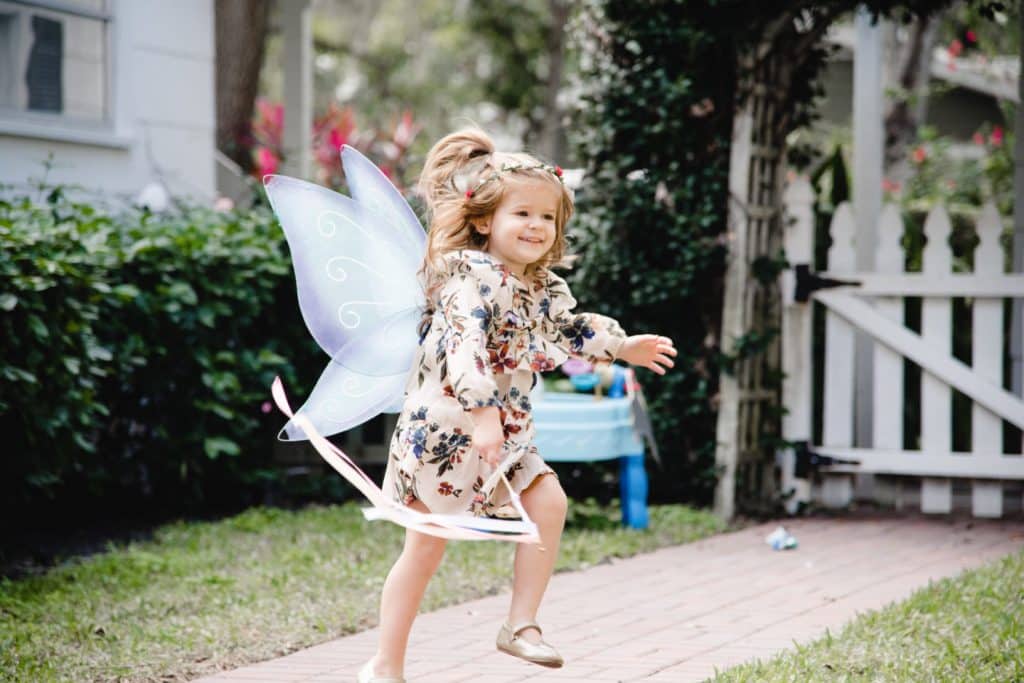 How cute is Tinkerbell?! My little goddaugher is the most precious thing. 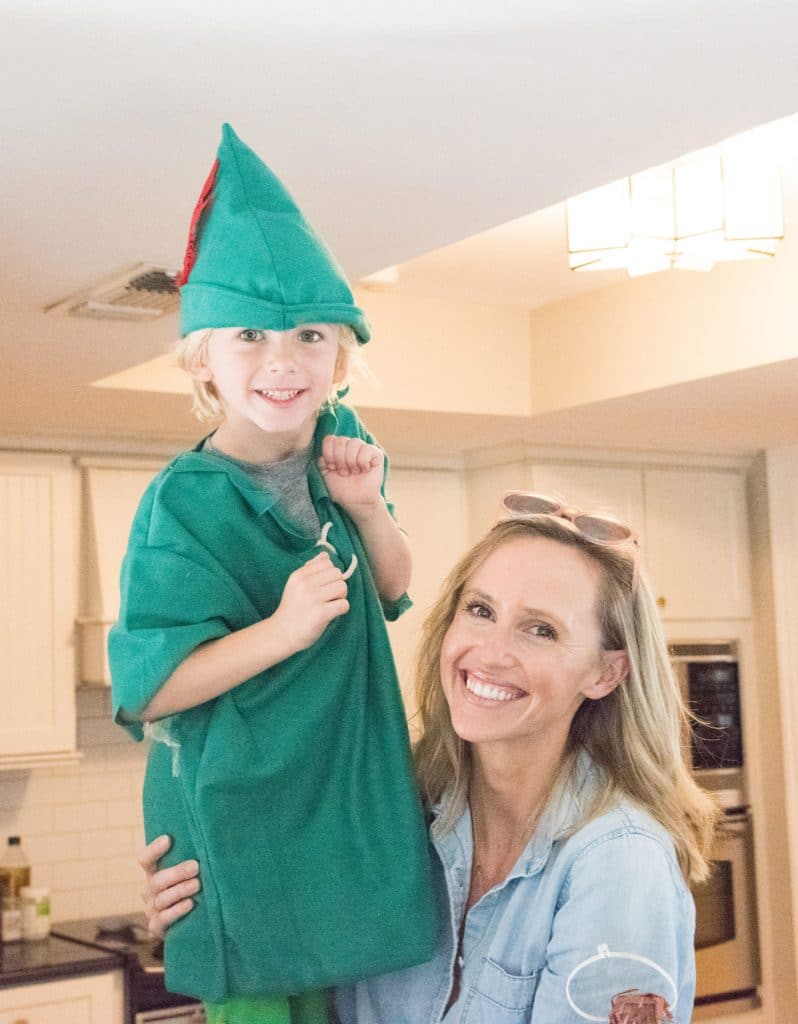 I just adore you, Peter pan!!