Over the past few years, I’ve heard a major comeback of a favorite phrase of mine from sociology: it takes a village. I’ve heard it on the playground, seen it mentioned on people’s Facebook posts and even seen a few major brands use it in advertising. While it’s wonderful to see and hear, as a society, we’re leaving off half of the phrase. We’re leaving it off when we say it but more importantly with how we’re living it.

The full phrase is: it takes a village to raise a child. The second half of the phrase, “to raise a child” means more than parents helping one another. If it’s a phrase that we are going to say, write and repeat as a modern society, let’s live it to its fullest extent. If we do, we may start to get back to the true communities that once existed. 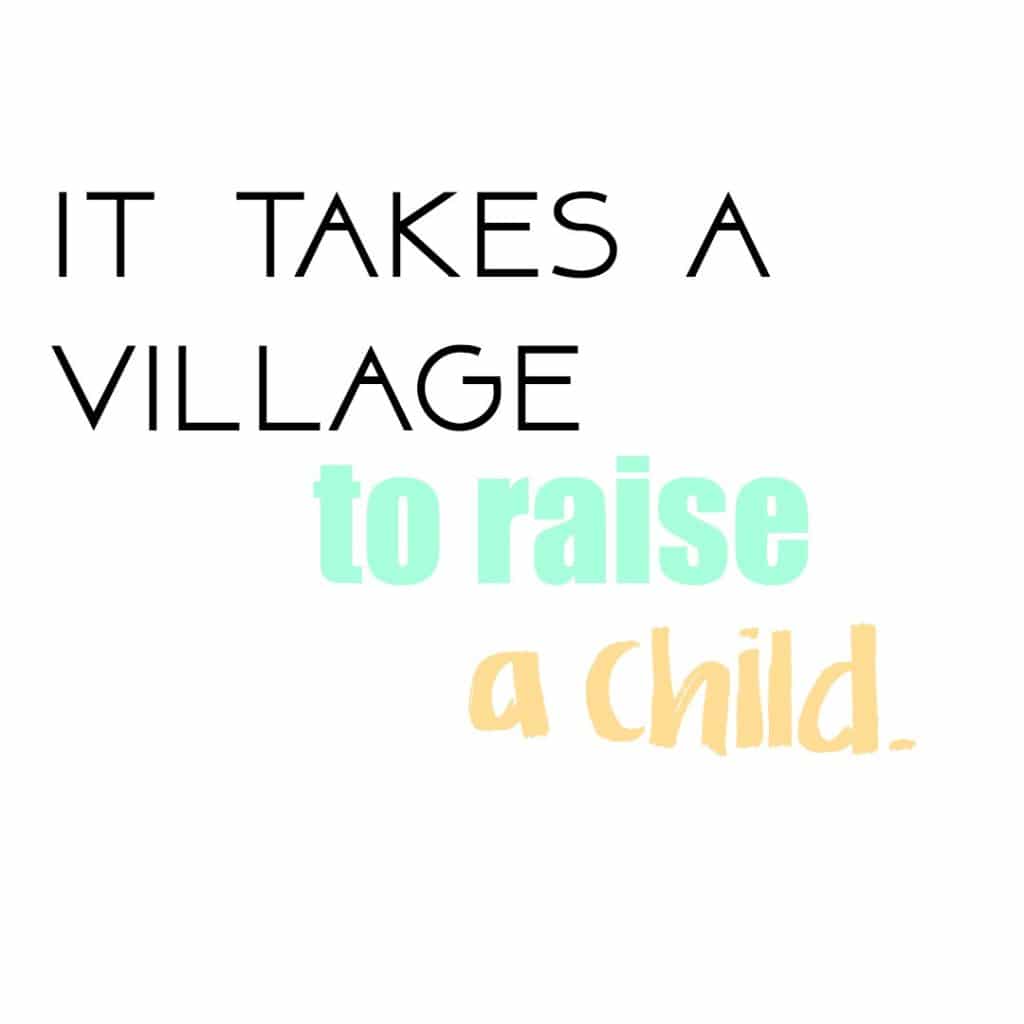 The exact origin of the phrase is unknown. Some believe it to be from an ancient African proverb, African cultures, and some believe it comes from the Native Americans; both very communal societies.

The feeling that a village must help in raising a child is more about the values, responsibilities and life lessons that the village must share and not only about helicopter parents getting help from the village.

The child grows up, and “is raised” around the values and morals of the entire village, not just what’s going on at home. While the phrase “it takes a village” is being used at an all time high, a sense of communal society and shared values amongst raising our children may be at an all time low.

Yes, it’s important that we share our sleep training tips with fellow moms on Facebook and that we give each other’s kids a ride home from Girl Scouts. But how do we go back to relying on our village to help truly raise our children from a values and reliability standpoint for the child?

First, choose your village wisely. Whether it’s a suburb, a city building or a rural community, look more at the village than the actual living space.

When we chose the town where we are currently raising our four children, the first thing that stood out about the town was that kids were walking around downtown… alone.

I didn’t know a ton about the town ahead of time, besides what “the internet told me” about home values and schools, but each time we went to look at houses it was always the community that appealed to me more than the homes we looked at.

The downtown was always bustling and yes, there were really happy kids out without family members, riding bikes, grabbing ice cream etc. We chose a house that was a few blocks from this quaint downtown, for walkability and community.

Trust me, there was nothing Pinterest worthy about the house: I chose the village not the kitchen backsplash.

Let the village in. This is what is so hard for many.

If we never let anyone else help in raising and teaching and more importantly correcting good behavior to our children, how will they ever care and respect their peers, their job, etc over their years?

How will they react to different opinions if the only opinion they are ever raised to respect is that of their parents? A village can’t withstand only one-sided opinions.

Teach kids to have an open mind with various people correcting and reprimanding to avoid behavior problems in the near future. It’s critical for how they are as adults and the next generation of the village.

From birthday parties to soccer camps, I feel like my kids are invited to things further from home all the time.

Going out to dinner? Pick a spot in your town. Want to do something as a family on the weekend? Ride bikes around your own town.

It does take a village to raise good children, so give them more time in their village. They can’t rely on a place they don’t spend enough time in.

They can’t get to know the people around them if they are always being carted around in the car to other places.

Make your children know they’re reliant on the village. For me, this is the most important part. This is where we take the “it takes a village” part of the phrase with parents helping parents to the “raise a child” part of the phrase where children are aware others are helping raise them.

Next time you need an ingredient for a recipe? Don’t run to Amazon Fresh or Instacart right away. Borrow it from a neighbor and send your child over to get it. This is one of the simplest yet impactful ways for a child to rely on a village.

Sounds silly, I know, but the more the child relies on the village, the more respect they have for it.

There was a moment a few years back that I thought about all the time when asked about “my village”. It’s one my kids brought up often afterwards and I bring up to them when we need a reminder about all people helping one another:

I was pregnant in the winter and after many days inside due to a snow storm, decided to venture out with the kids. At the time, we lived in a spot in town near an intersection; a busy enough intersection that there was a traffic light.

As I backed out of the driveway the car got stuck in the snow. I panicked. The car was stuck straight across the street forming a T right before the intersection. Cars stopped immediately and people helped me get the kids out of the car around the snow.

Someone else called the police, neighbors came out: some helping to get the car out and some helping with my kids so I could focus on the issue at hand. We lived on a street, many walked down to get to the NYC train and a number of people stopped to help.

Despite being in suits on their way to business meetings, they were in the street trying to push the car. At one point, alongside the police, there had to be 10-15 people helping us in different ways and before I knew it, the car was back in the driveway and we were all safe.

I don’t remember asking anyone for help, people just helped. When the kids and I shared the story with my husband when he came home they excitedly told him about the next door neighbor letting them watch the action through the front window while “everyone in the whole town helped us”.

This was important because we were in need, we were in danger and the village came to our rescue without us asking. This was an example I will remind my kids of often. 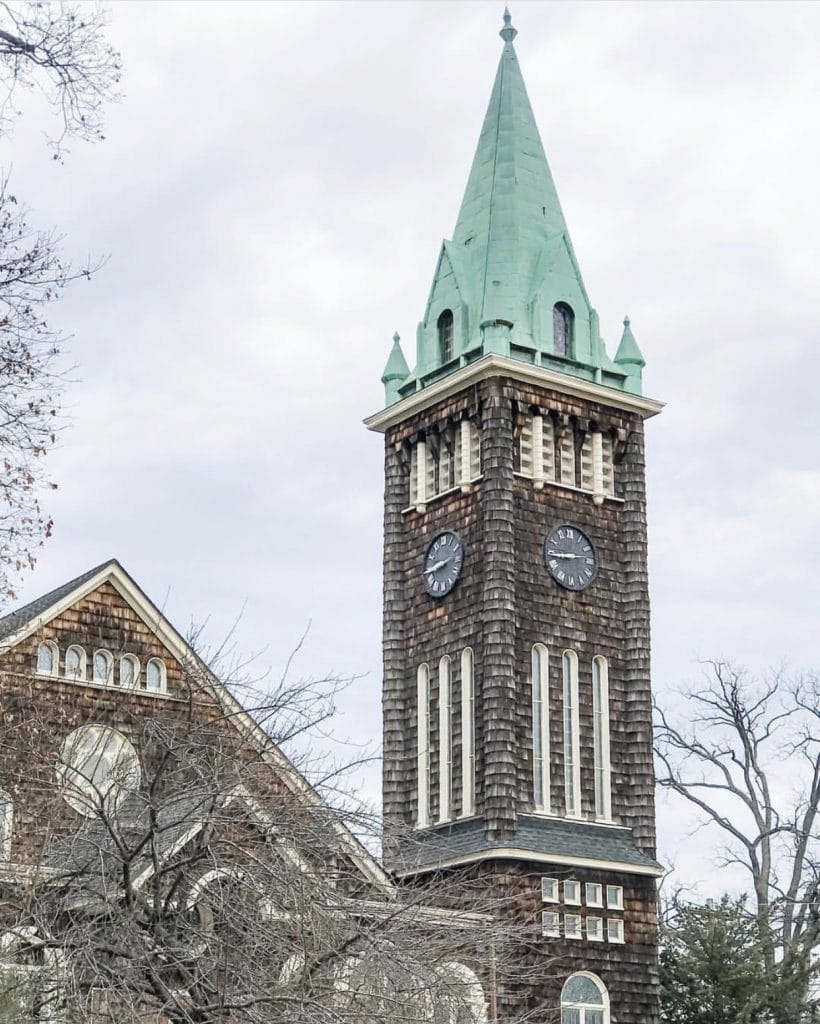 Involve your kids more in things you do to help your village. In our town, there’s a wonderful group of moms and one thing they do is organize meals when a new baby is born.

When I signed up to bring someone a meal, I used to prepare it when they napped and drop it off on my own after my husband was home. Then this happened: it was about 8 weeks after my 3rd baby was born.

That time when the fussy period of the day kicks in and it’s almost always at dinner time. It made for tough evenings and little patience with a 3 and 4 year old to take care of alongside a screaming infant.

One particularly tough night there was a knock on the door and there was a family from a few doors down. The mother and all 3 kids carrying our dinner. It was freezing cold outside and the kids were all bundled up and each one was holding part of our meal. I will never forget when her 3 year old handed over a giant bowl of meatballs to my 3 year old.

They were in preschool class together and neighbors. I will never forget it because it was another one of those times that made an impact on my kids in their village. We had a wonderful dinner that night and they had even brought homemade cookies for dessert.

It sounds silly to say that it “made an impact” on a 3 year old but for months after we’d see this family outside, at the playground or at school and my daughters would remind me “remember when Mikey brought those meatballs”.

We relied on another family for our food. We enjoyed it. We talked about it.

My kids knew it was OK to rely on other people in our village. And as a child develops, they’ll bring this good habit with them.

From that day on, now when I deliver a meal to a family that has had a new baby, I involve my kids and remind them that each time a new baby joins our family, we need other people to help us.

Kids in the village need to rely on other kids too. Encouraging kids to practice this can have so many benefits in the long run.

My 8 year old daughter walks home from school. She’s not alone, she walks home with 2 middle school age neighbors. Recently she asked if she could have a phone.

Because with phones we’ve gotten further than ever from letting the village raise the child: our children barely look up from their phones to see people in the village, let alone rely on them.

We talked about what to do in an emergency and all the things you do without a phone: when to ask to use someone else’s phone, safe houses along the route to knock on their door, etc.

We talked about telling me if she feels unsafe walking home or with those around her and that’s not something a phone can help. I said “do you trust the neighbors and friends you walk home with” She said “yes, of course”. Then rely on them to help you get home safely.

Back in the day you relied on the village for everything: one family was the butcher, one was the doctor, one the baker, etc.

You cared and respected everyone because with a reliance on everyone in the village, you couldn’t risk harming or disrespecting anyone on a regular basis.

Your village was just as important as those living in your house. You can think my next idea here is too far fetched in today’s society, but let’s take it to the extreme for a moment: if from a young age you are taught to rely on those around you, not just your family… would you go to school one day and harm those you have to rely on?

For many in our country (or ok, most) this concept is completely foreign. People have their routines, their own beliefs and their own children to raise.

They don’t have time for other people’s thoughts, never mind time to help raise another person’s kids. But we’ve brought back half the saying “it takes a village”.

After 9 years of parenting there are many things I question whether I am doing them right or wrong but finding a good village for my family is one I have no doubts about.