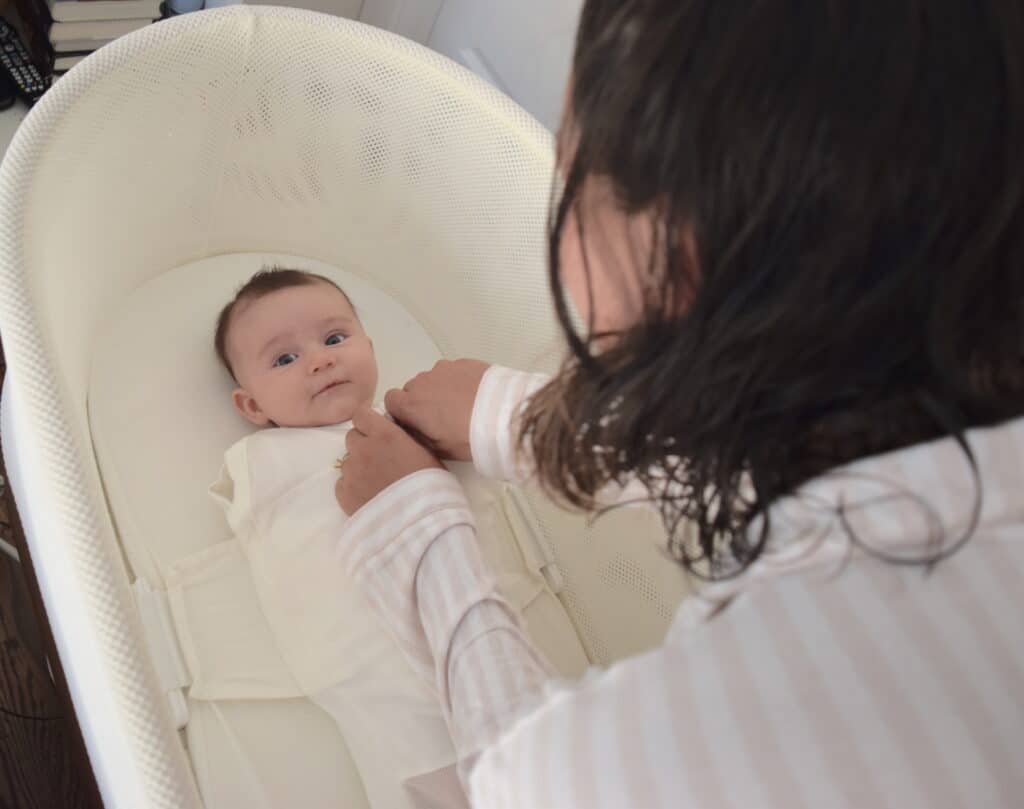 Bringing a newborn home for the first time is SCARY. I will never forget the first night. I don’t think I slept at all. We chose the Snoo as our bassinet and I had it positioned next to my side of the bed and “slept” with my head basically touching it, peaking in every few minutes to make sure she was OK. I had a lot of worries (in general) but specifically about her sleep (i.e. – what if she spit up and choked on it, what if the swaddle covered her, what if she rolled over and couldn’t turn back around)? Today I’m happy to share my review of the Snoo Bassinet and hopefully answer question you may have about it. 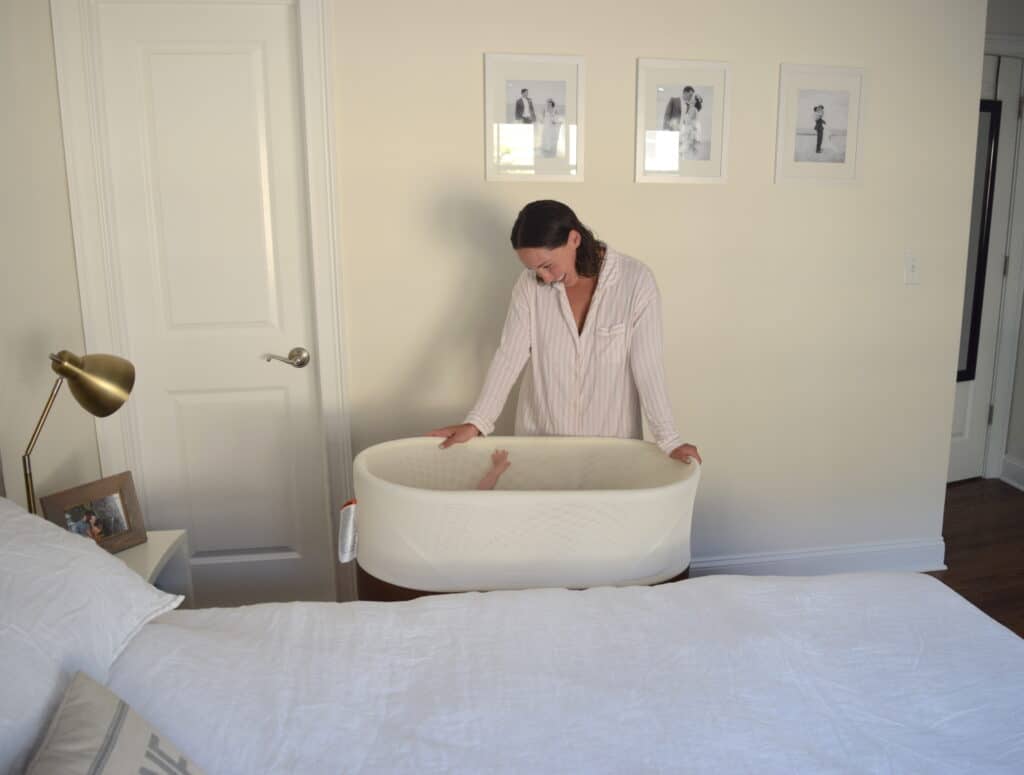 Coming home from the hospital, the Snoo immediately made this transition easier for me. I didn’t have to worry about the swaddle or rolling over because of the way the bassinet is built, with the swaddle being strapped to the side of the bassinet making it impossible for the baby to roll over. 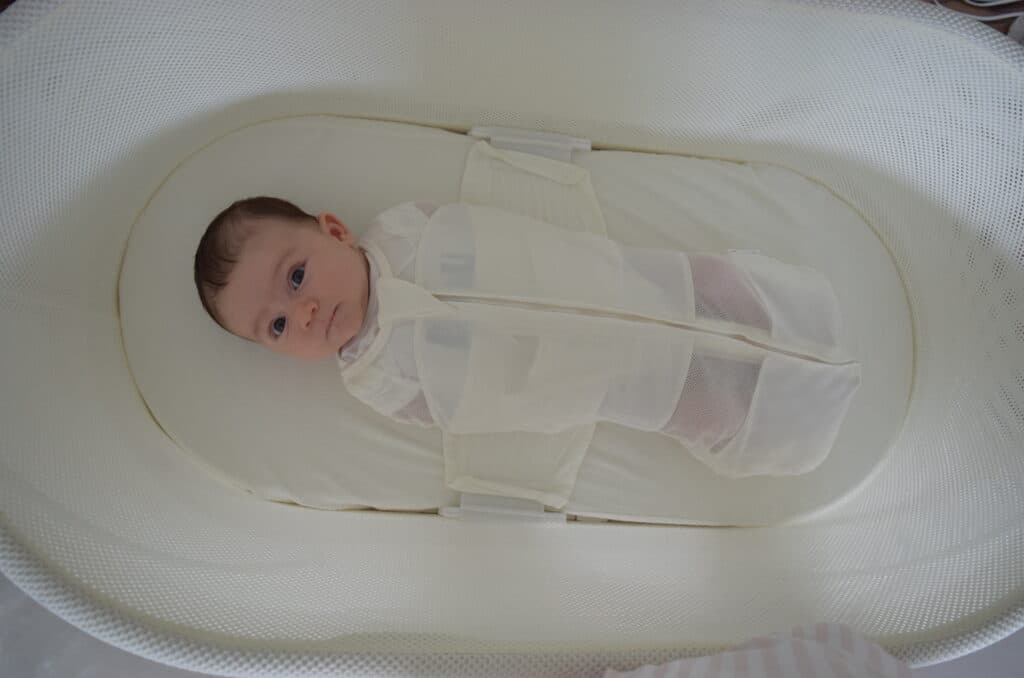 I also didn’t have to worry about a swaddle blanket coming lose and covering her because the swaddle in the Snoo zips up and is pretty tight. This was great because the nurses made swaddling look so easy and no matter how many times I tried it, it always came lose. I even took a video of the nurse doing it in the hospital for reference and that still didn’t help! Bryan often questions me when I feel that I NEED so many baby products, but when they can make our lives as new parents in any way easier and ease some of the stress and anxieties, he’s aligned (Snoo approved, 500 bows not approved). 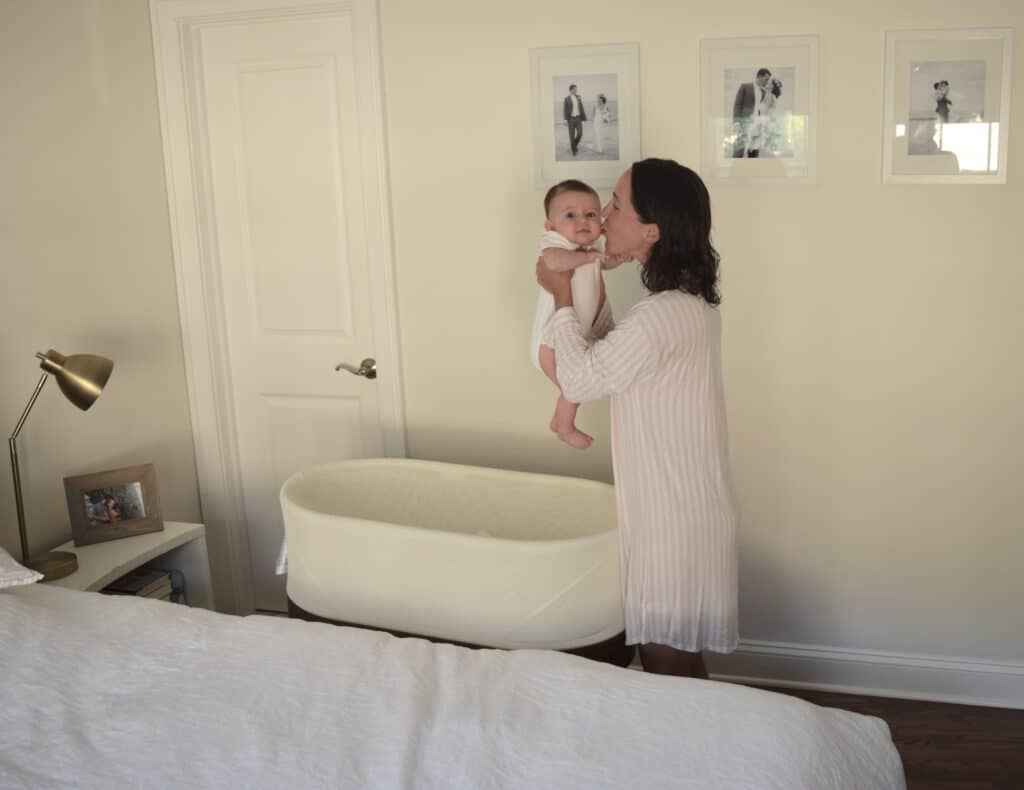 I never used another bassinet so I don’t have anything else to compare it to but the Snoo has really been working out well for us. They call it the “night nanny” because it soothes the baby with rocking and white noise that imitates how it was for baby in the womb. Instead of Bryan or I having to pick Parker up and rock her back to sleep every time she cries, the Snoo hears her cry and responds with increased white noise and rocking. 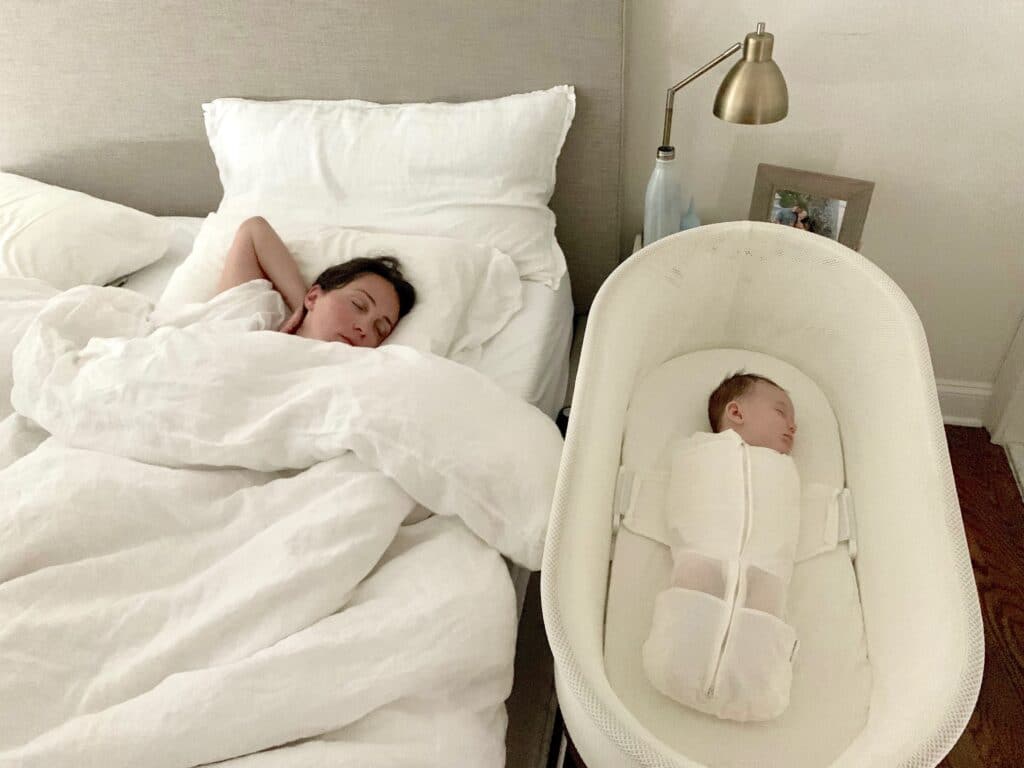 There are 5 levels of intensity which increase as she continues to cry. The baseline setting of gentle rocking and white noise is what she sleeps with through the night and what we use most often. With this setting, she sleeps pretty well and doesn’t cry often. Instead of crying, she usually fusses with either grunts, karate-chop-like kicks with her feet up and slamming them down (I think she does this when she has gas), or moans. When she does this in the middle of the night, some of the time she isn’t even awake but I know that if I don’t catch it early, she will fully wake up so I manually adjust the intensity into the higher levels and this often puts her back to sleep without me having to pick her up. Pressing a button when you’re half asleep is a lot easier than a full wake up + getting baby back to bed routine! It doesn’t happen often but there have been a few times where we’ve let her cry as the Snoo runs through it’s settings and it has soothed her. 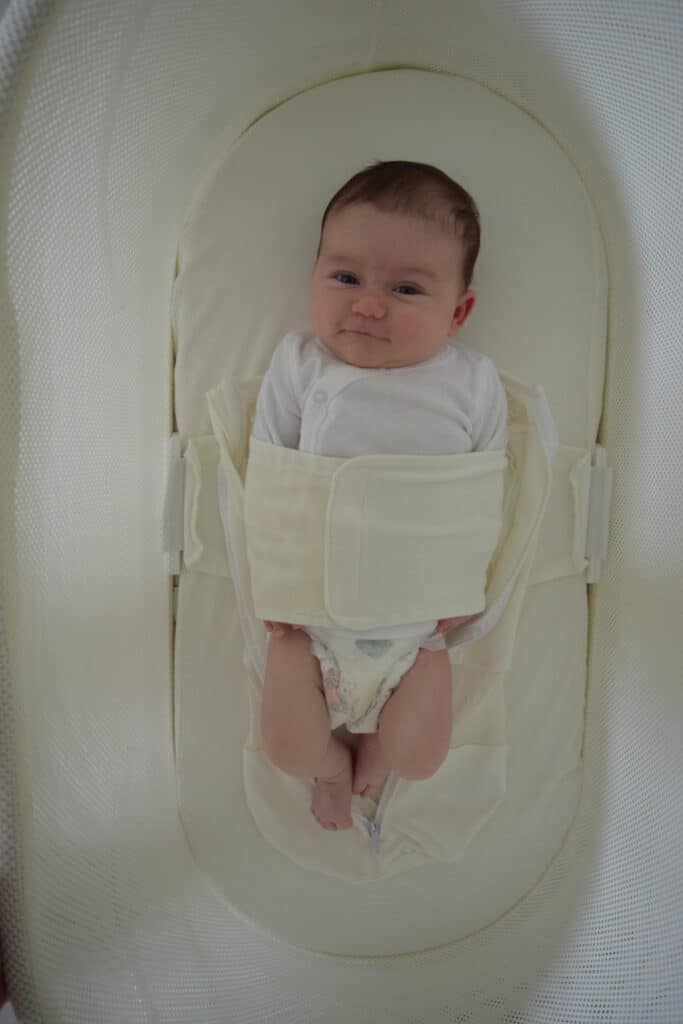 Support from the Snoo Team

I’ve also loved the provided support from the sleep specialists on the Snoo team. We’ve had a lot of sleep struggles due to Parker’s acid reflux and our specialist Jamie has been so much help. Some of her suggestions included raising the head side of the bassinet so that she was sleeping on on incline as opposed to flat on her back which we did with first with books and then with the Snoo leg lifters, folding a towel under her feet and zipping it into her swaddle to help with gas, and adding a bag of rice on her chest to provide the cuddling sensation. I haven’t tried the rice trick yet but the towel trick definitely seemed to help with her karate-chopping-legs. With Parker’s reflux issues out of the picture, this bassinet has been pretty perfect. The only thing that I wish it had was a peak-a-boo window for me to peak in from the side of my bed without having to lift myself up to look over the sides. That said, I do love that the sides are mesh and breathable. 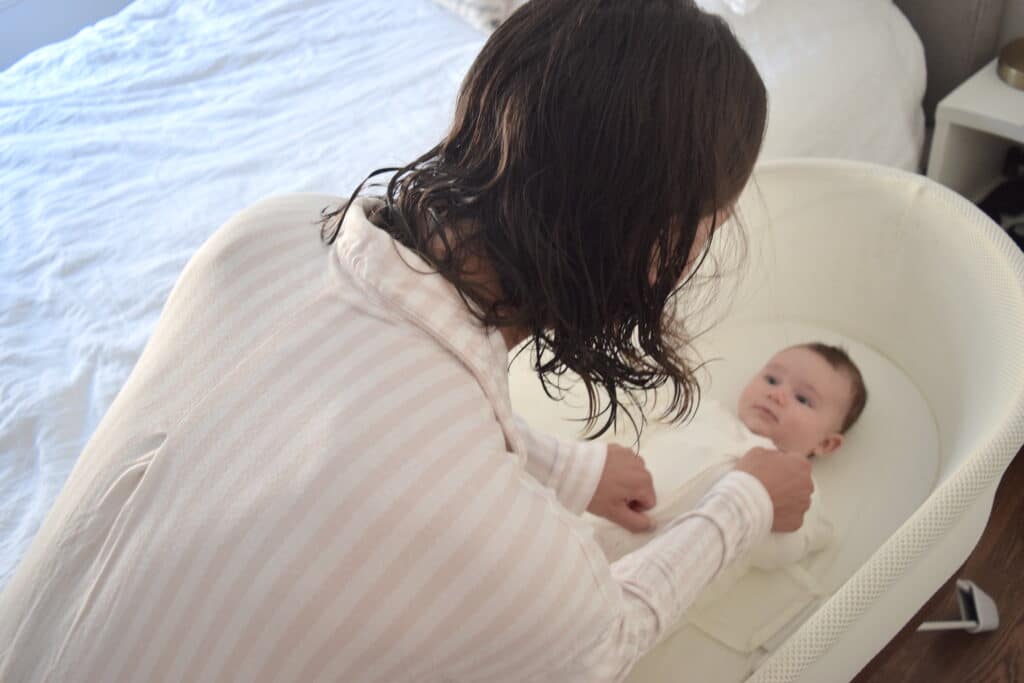 I have experimented with weaning mode which removes the gentle rocking and only keeps the white noise on unless baby cries and have also experimented with allowing her arms out of the swaddle but at 3 months, she’s not ready to wean yet. After sleeping through the night (9.5 hours!) for about 3 weeks, she went through a sleep regression around 3 months where she was waking up again every 2-3 hours like a newborn. I thought that weaning mode might help but after turning weaning mode off, she went back to sleeping through the night (for the most part). For now, my plan is to focus on getting her into more of a routine with her new 7P bedtime, continuing to work through her reflux issues, and letting her nap with her arms out during the day so that we can re-try the weaning tactics closer to 5 months when she is more likely to be ready.

Thank you to the Snoo team for the best bassinet! I don’t know what I would do without it! – from a less-tired mama 🙂