Earlier today, I shared about the fun & festive birthday party we had for my son’s fifth birthday.  Life is all about Star Wars for him right now, so it was an easy choice when deciding on a theme this year. May the force be with me as I planned a full birthday party for around 25-30 kids and their parents.  In my previous post, I shared lots of fun Star Wars party inspiration, but I wanted to share a little more in this post about the activities that we did during the party.  My little Darth Vader is all ready for the party… 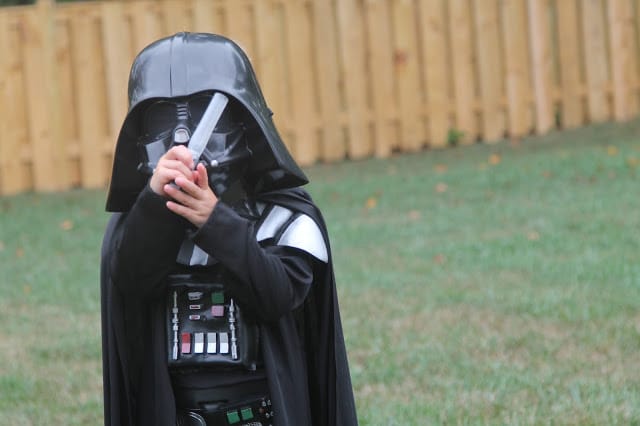 I discussed the Jedi missions in the last post, but wanted to share more details about each in this post here.  There were 8 Jedi missions for the kids to do, which are essentially the birthday party activities that we created for the kids.  I had each mission set up individually, with directions printed right next to the activity so each mission could be completed on their own, instead of doing everything as a whole group.  Since most of these kids were four or five and most parents were present, I left it very open-ended.  Kids could do as few or as many missions as they wanted and the whole purpose of the party was to have fun together, but provide lots of fun entertainment for the kids to keep them busy.  Here are the 8 Jedi missions that we had for the kids to complete at the party… 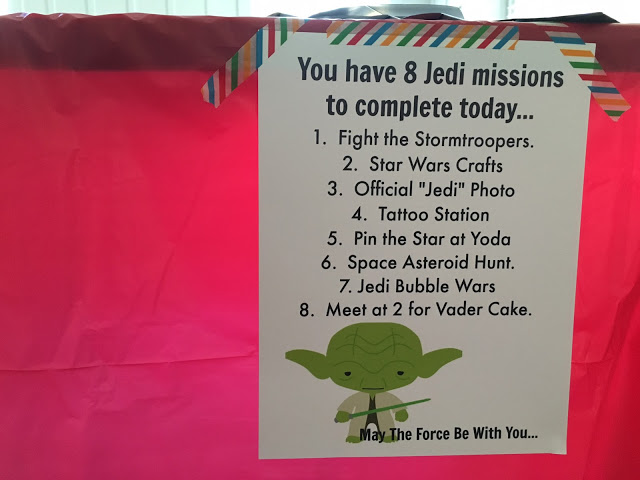 1.  Fight the Stormtroopers:
For this activity, my husband created about a dozen Stormtrooper balloons using white balloons and a black Sharpie.  We put them in our bounce house and the kids could have fun bouncing with the balloons! 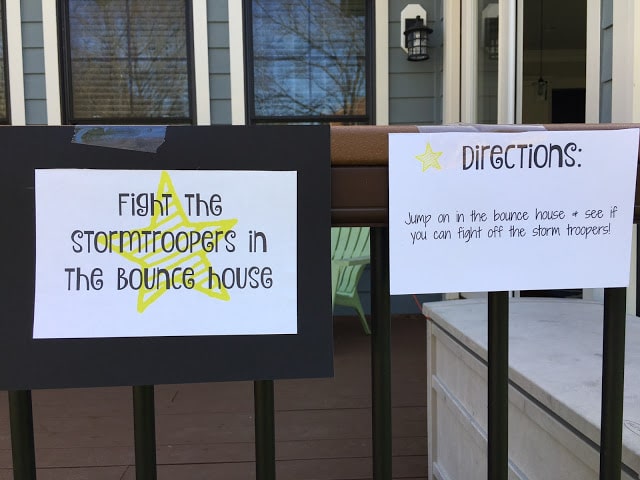 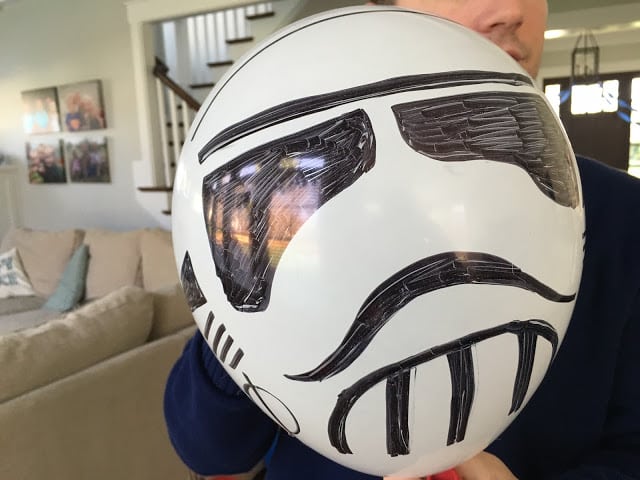 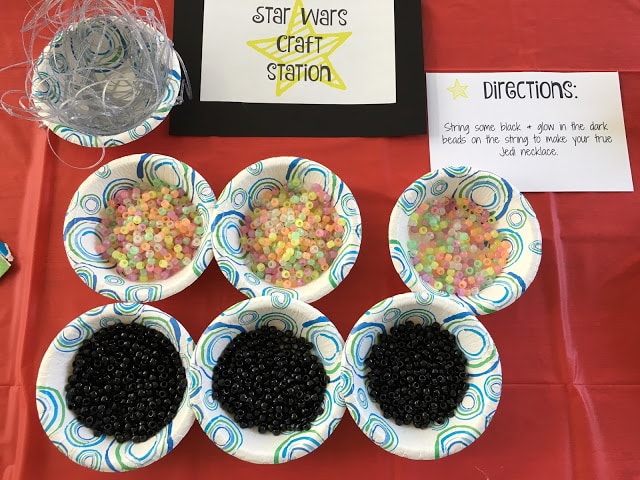 The second craft was super easy to prepare.  I printed some free Lego Star Wars printables that I found online and put out with crayons and some Star Wars stickers. 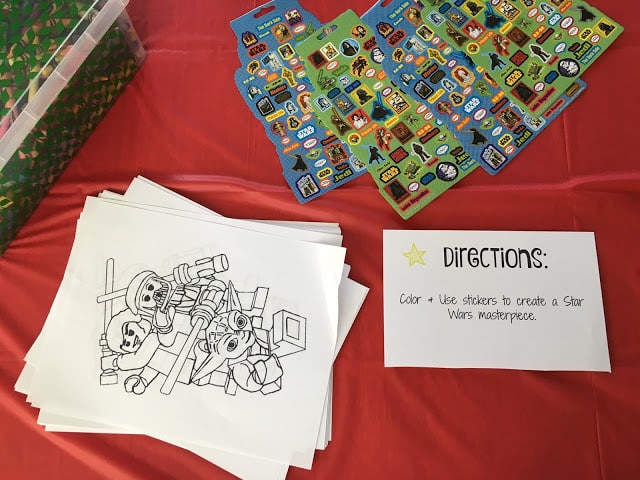 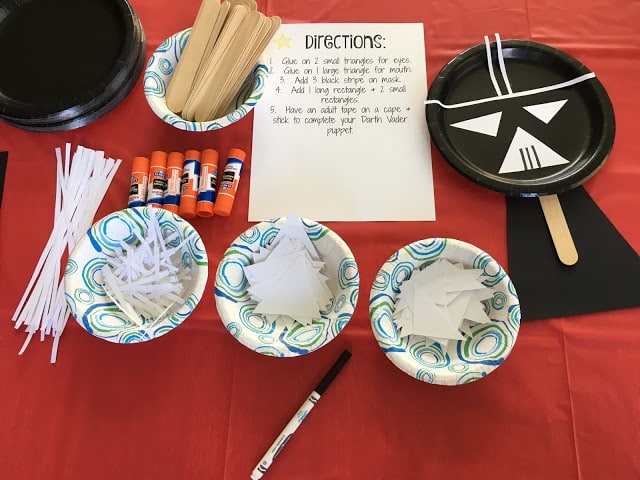 We hung this Star Wars photo backdrop & placed a bucket of lightsabers next to it.  Kids could grab a light saber & have their mom or dad take a picture in front of the backdrop using their cell phones.  They could also get a picture with our very own life size Darth Vader as well! 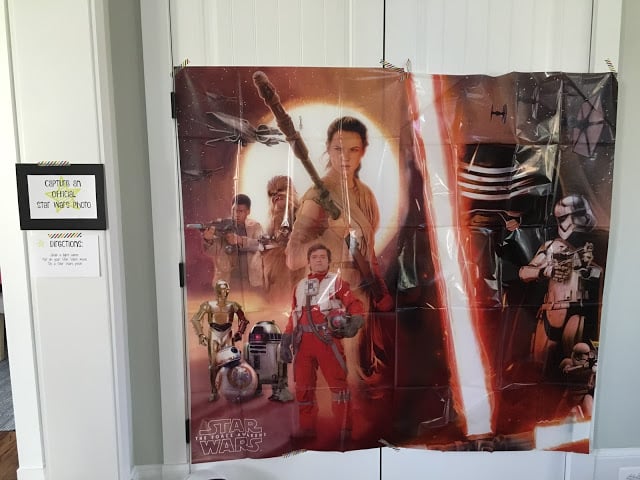 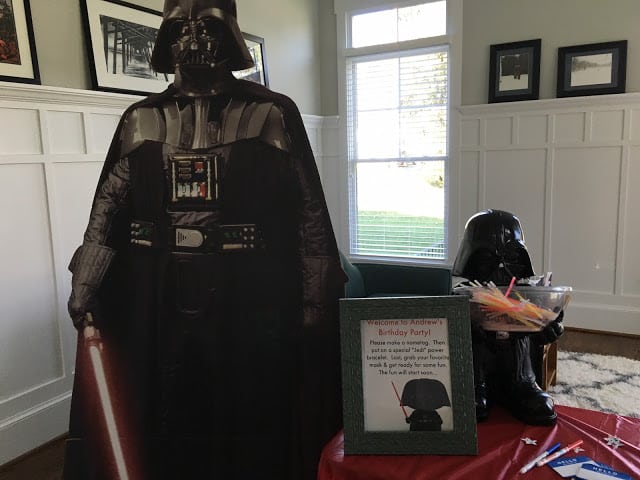 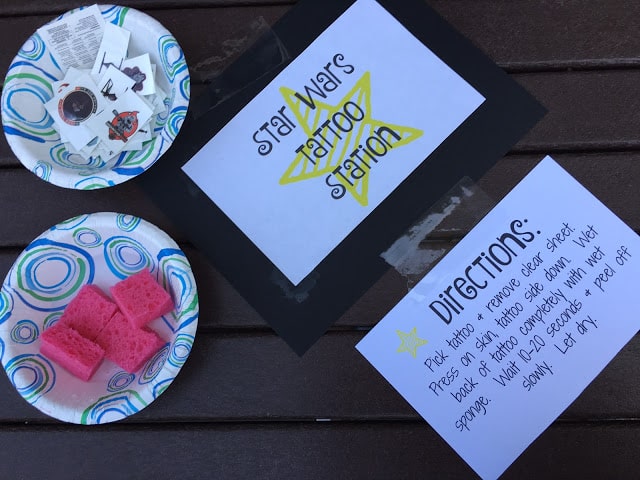 Just warning you all, I’m not an artist.  Despite my lack of artistic talent, my four year old thought this Yoda was pretty cool so we used it.  I drew a Yoda and the kids could play Pin the Star on Yoda.  All they did was grab a yellow star Post-It from the bowl & put their name on it.  Then, they put the blindfold on and tried to pin the star on Yoda’ shirt. 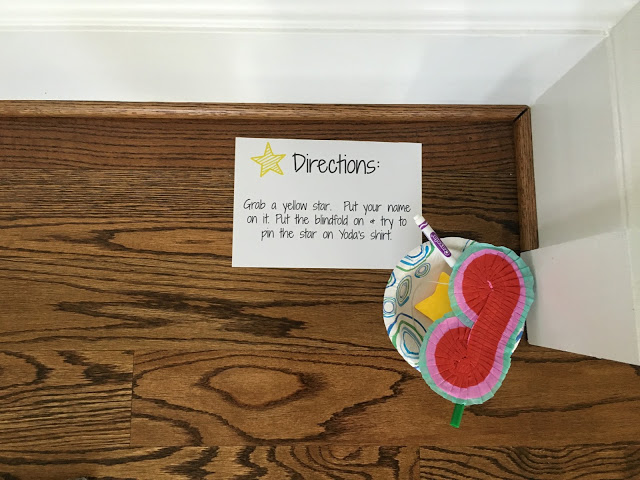 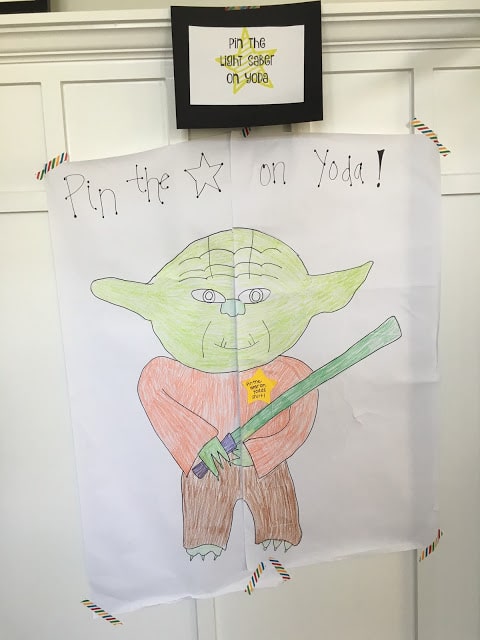 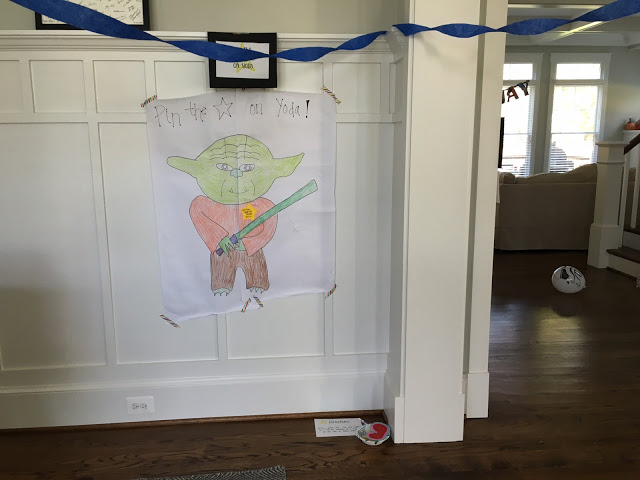 6.  Space Asteroid Hunt
For this activity, I hid around 200 asteroid balls in our backyard.  I created the asteroid balls by rolling up a little bit of aluminum foil into a ball. The kids had to grab a blue bag & go on a space asteroid hunt trying to fill their bag with ten asteroid balls. 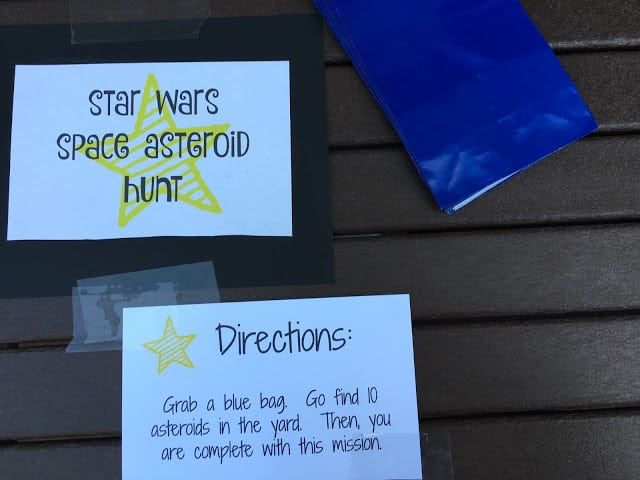 7.  Jedi Bubble Wars.
We put out these mini glow sticks (light sabers).  The kids could use their lightsaber & try to pop bubbles that were coming from the bubble machine. 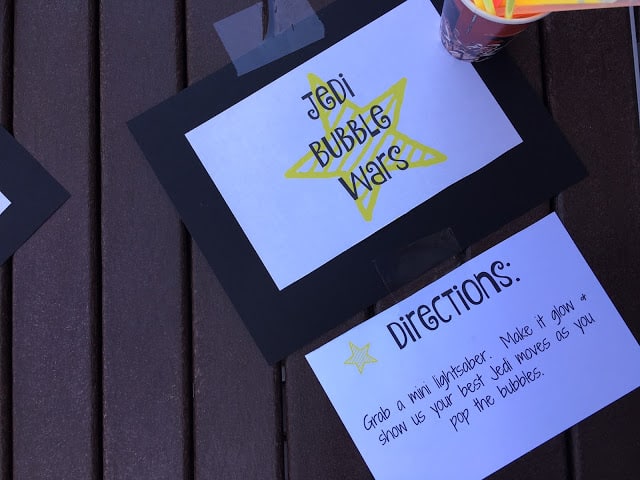 Our main cake was a simple cake from Costco with a Darth Vader cake topper on it.  Andrew blew out the candles on the big birthday cake & then each kid got one of these cupcakes with a Star Wars ring on top! 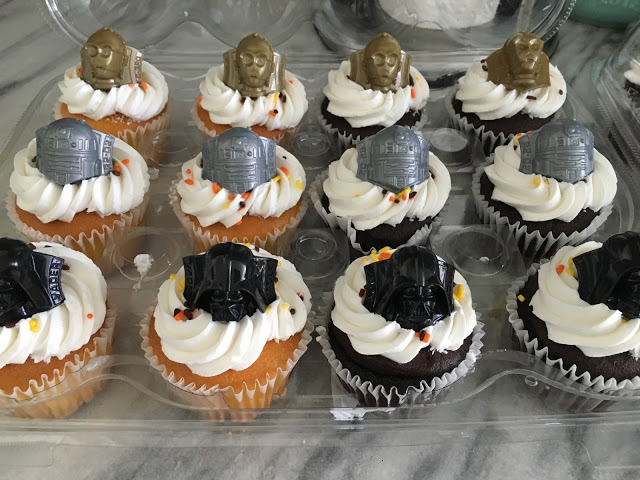 For more details on the party, make sure to head to my first Star Wars party post here!  I mentioned this in my previous post that this may look like a lot of work, but I didn’t really start getting ready for the party until the day before.  Thanks to some creative thinking & some great party supplies that I had purchased ahead of time, this party pulled itself together fast.  I had a lot of fun creating this party & hope that these ideas and activities inspire you to have a force-filled Star Wars birthday party! 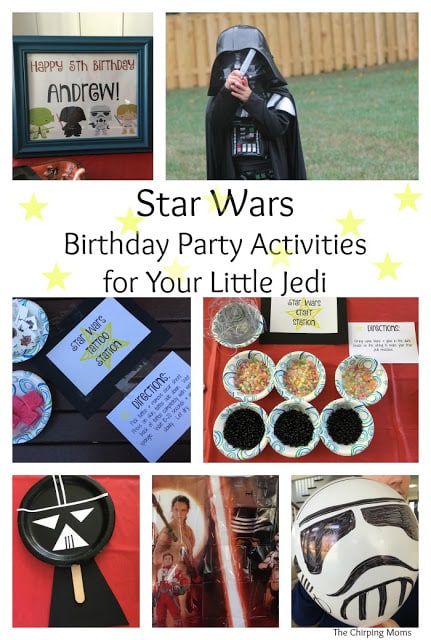 Thank you Birthday Express for helping with the party planning fun!