This pull-apart cinnamon roll heart is one adorable way to celebrate Valentine’s day at home. It’s also a delicious breakfast meal to serve to loved ones for no occasion other than the fact that you want to show some love and appreciation!

A good friend of ours makes the most delicious sticky buns in a bundt pan. My kids always talk about it and a few times she’s even made it and given it to me in the bundt pan to bake the next day. They’re currently living abroad and we miss them (way more than we miss the sticky buns!).

I was going to ask for her recipe but she is a far better baker than I will ever be…. and then I saw that you can make an easy pull-apart cinnamon bread using prepackaged cinnamon roll doughs.

Making this makes me so smitten. It makes me think of the happier times as a kid when I get to see a special treat from my mom after a long day of playing outside. I hope this recipe can bring back some special memories for you too. 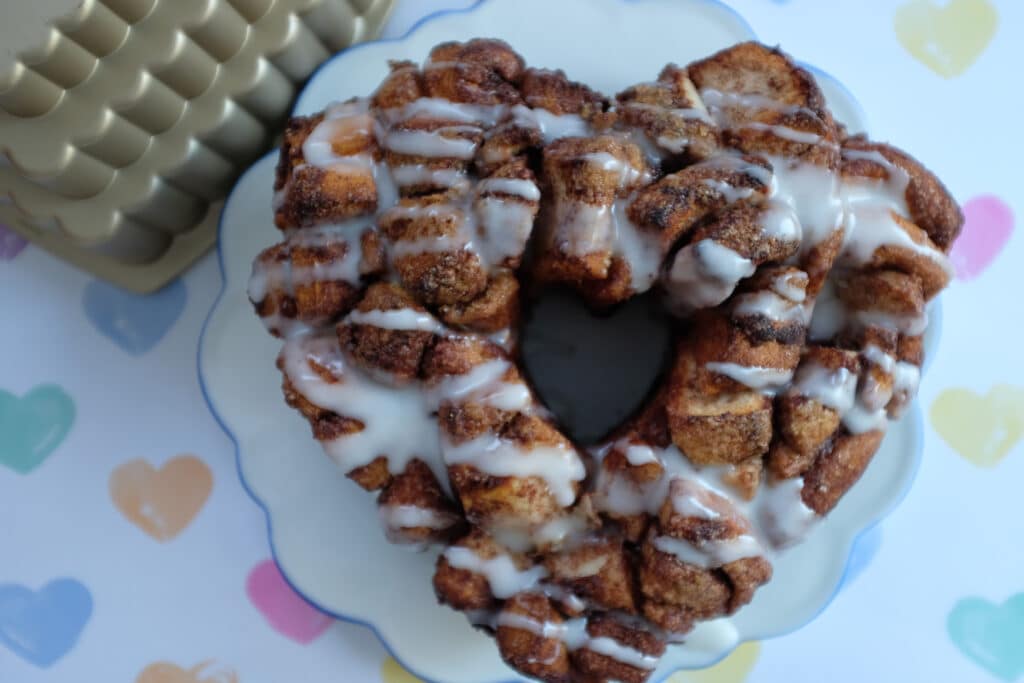 I tried a few times and have a recipe now that’s a combo of a few I tried. It’s still nowhere near as good as the ones our dear friend makes, but until she moves back to the USA this will have to do. It’s honestly really easy and when it’s all done looks a heck of a lot fancier than most things I bake.

Breakfast has always been my favorite meal to cook, even for parties. This recipe is going to be a go-to for me from now on. Believe it or not, it’s so easy to make this. The dough is fast and very simple, and there are no special tools involved.

I’m not a baker and my baking supplies are kind of lacking. So when I wanted to attempt an easy cinnamon roll pull-apart bread, I didn’t even have a bundt pan. When I was shopping for one, I spotted this pretty heart-shaped bundt pan.

Since Valentine’s Day is this month and I love all things holiday, I decided to go with the heart-shaped bundt pan. I figured even if my recipe failed and looked terrible…. at least the pan is pretty!

This bread recipe not only comes out gorgeous it’s perfect to taste as well. If a cinnamon heart-shaped pull apart bread doesn’t scream “I love you!”, I honestly don’t know what is. So if you’re looking for that perfect Valentine’s dessert, keep on reading. 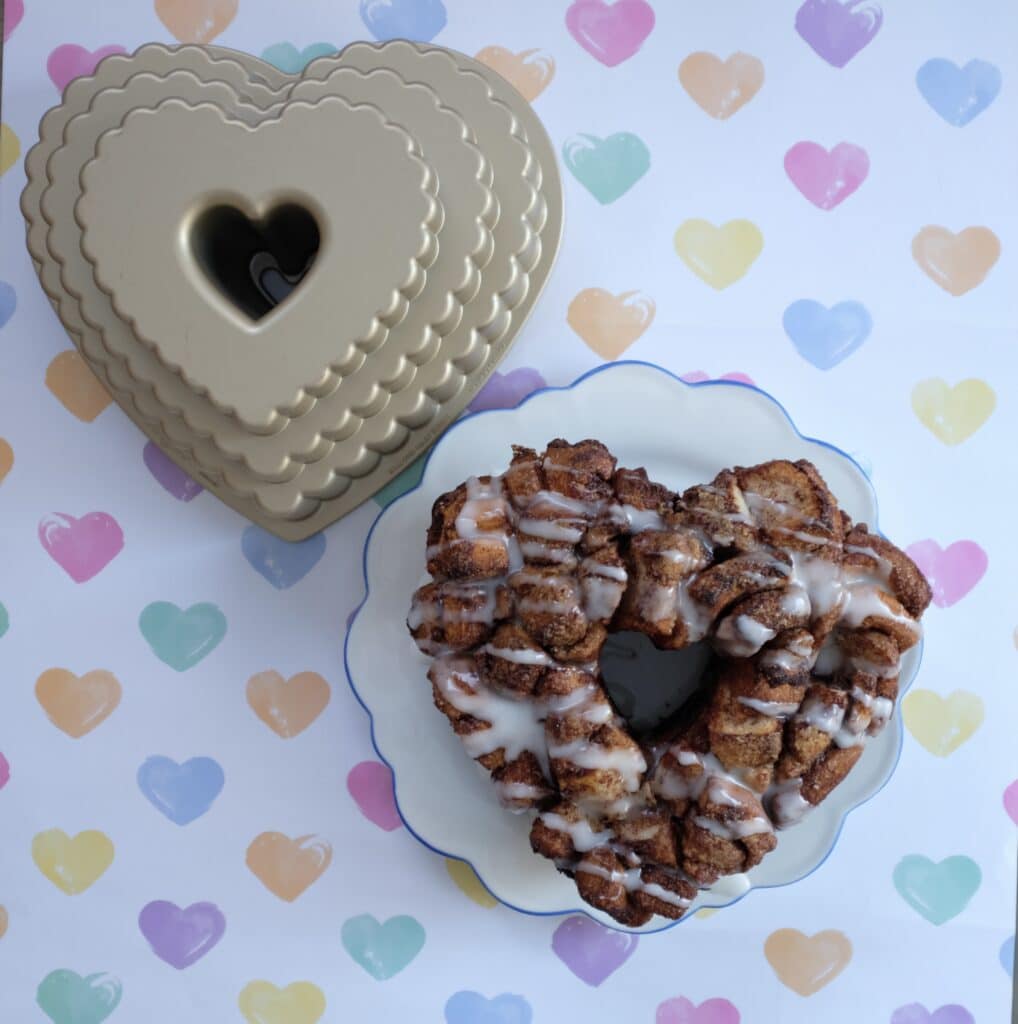 I think cinnamon buns are sweet on their own. A lot of the recipes called for a ton of sugar. I tried to pair down how much sugar I added and think it tastes great without being overly sweet. Here’s how we make our easy pull-apart cinnamon bread: 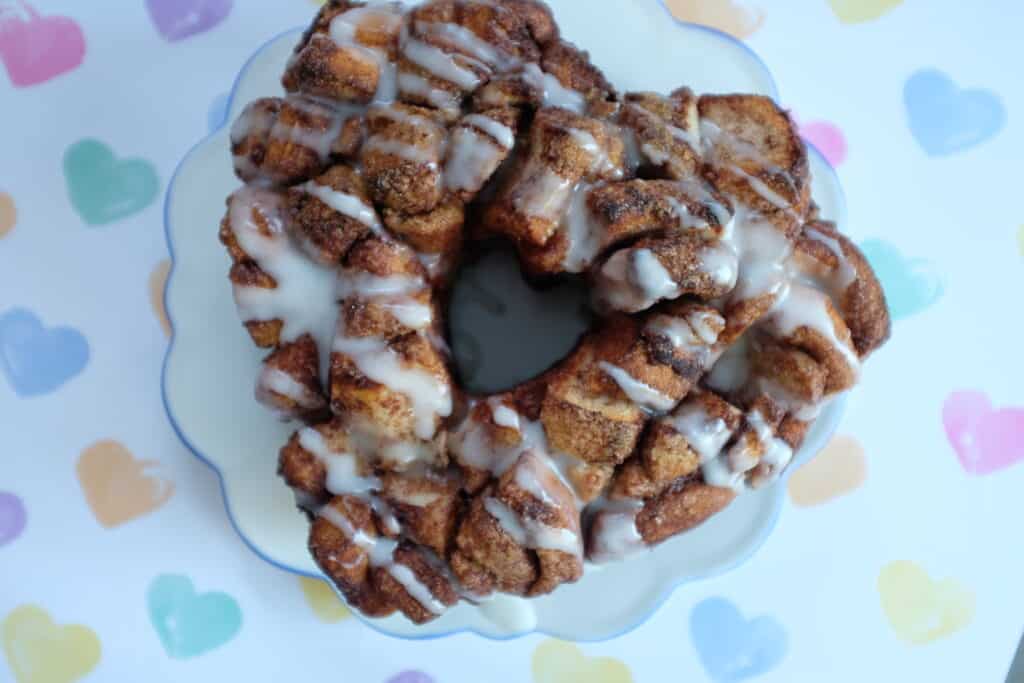 Heat the oven to 400 degrees. Generously grease the whole pan with cooking spray. Open up the cans of cinnamon buns and cut each one into 4 pieces. Mix the white sugar with the cinnamon and toss the pieces of cut-up cinnamon bun in the sugar/cinnamon mix.

Put all of the pieces into the heart bundt pan with parchment paper below. Melt the butter in the microwave and then mix in the brown sugar and vanilla extract. Whisk it together well and then pour over the cinnamon bun pieces. Bake for about 30 minutes. 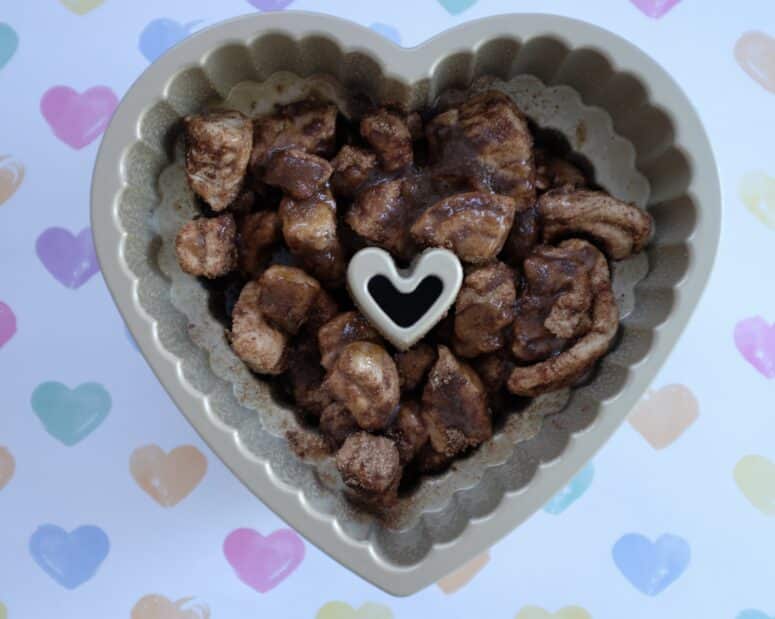 Now for getting it out of the pan…. the trick is to let it cool at room temperature enough to get it out without breaking but have it stay warm enough that it comes out and the icing melts. I do 12 minutes and it seems to work perfectly.

Last, is lightly flour the cinnamon roll with icing that came with the cinnamon buns or some cream cheese icing to drizzle over the heart. I think using both packs makes it a little rich, and prefer to use 1 but that’s up to you!

Decorate according to your taste and serve warm to friends, family, or your lover! Will you be making this at home? 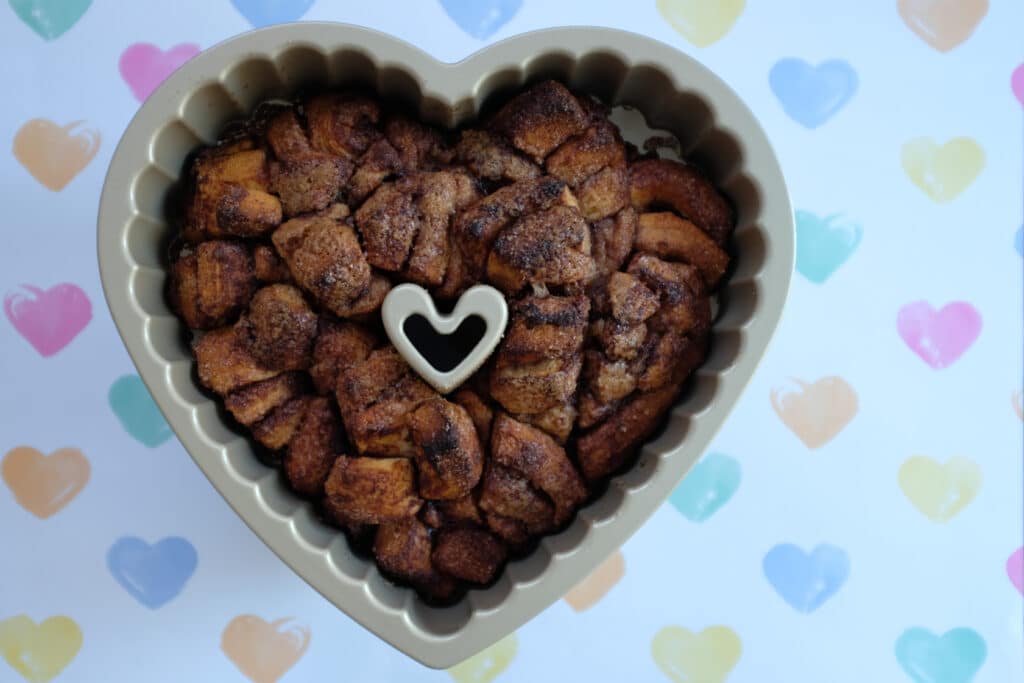 Pin this recipe for later! 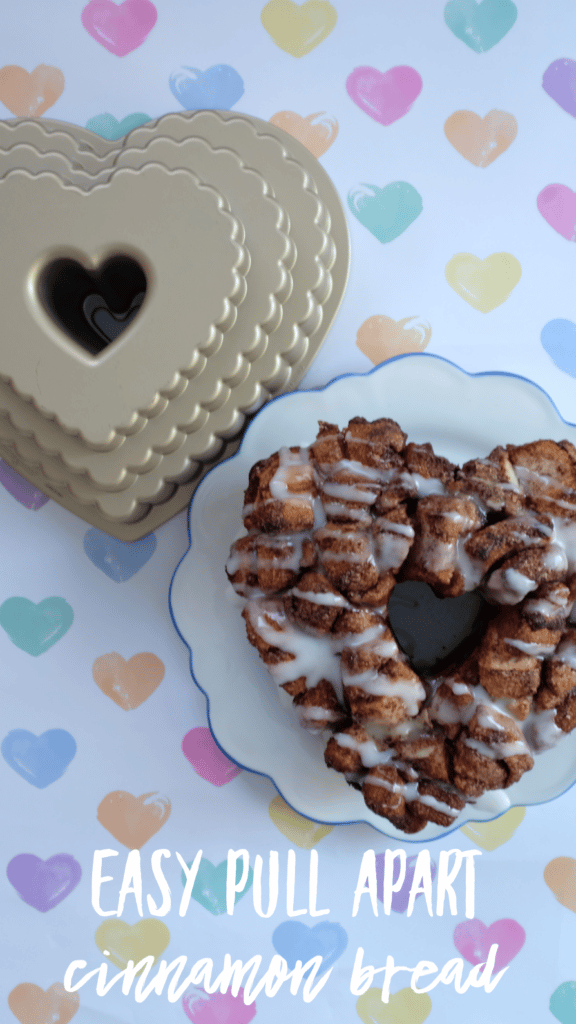