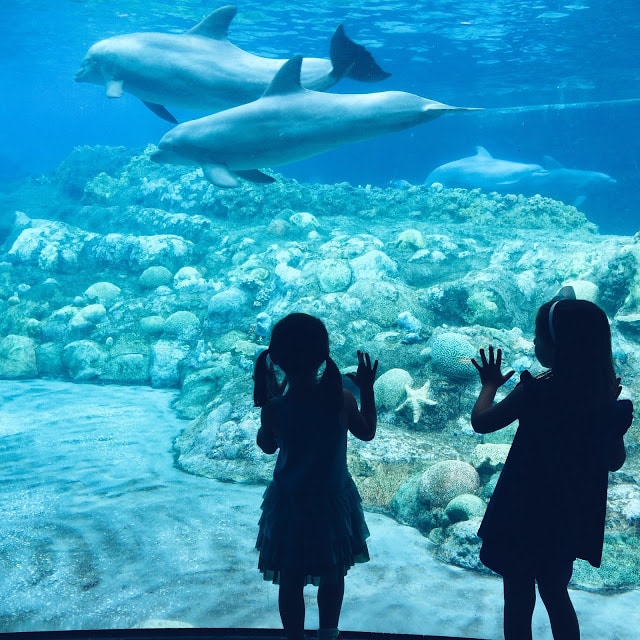 I’ve written many time before about my girls’ love of animals. They both read about animals, play with toy animals, draw animals and have a lot of questions about them too. Both Maggie and Alex have loved animals since they were very small and neither one have a bit of fear when it comes to meeting new animals. This past year they read the book and then saw the movie Dolphin Tale. Learning about this particular dolphin’s story, combined with a love of animals and the ocean, had them very intrigued. 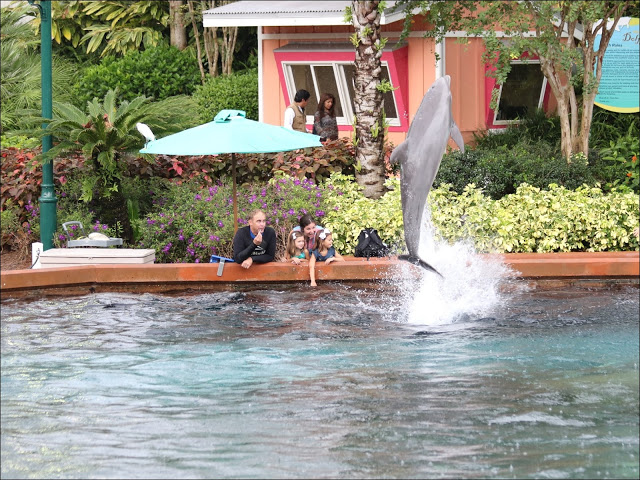 They wanted to know everything they could about dolphins. From the bathtub to the backyard, they’ve reenacted hundreds of “dolphin rescues” of their own. We’ve checked out nearly every book in the library about dolphins and it got them asking “when can we meet a dolphin?”

I started looking into some places we could see dolphins up close and aquariums to visit. From the start, Maggie and Alex have always loved visiting farms, zoos and aquariums. I was sure there had to be a place to visit where they could meet a dolphin up close. We had plans to be in Disney World in early September and I looked into a visit to SeaWorld while we were in the area. I was very excited to find out about the Dolphins Up Close program at SeaWorld Orlando’s Dolphin Cove. The girls were beyond excited when I told them we would be visiting dolphins and other sea animals while we were in Florida. 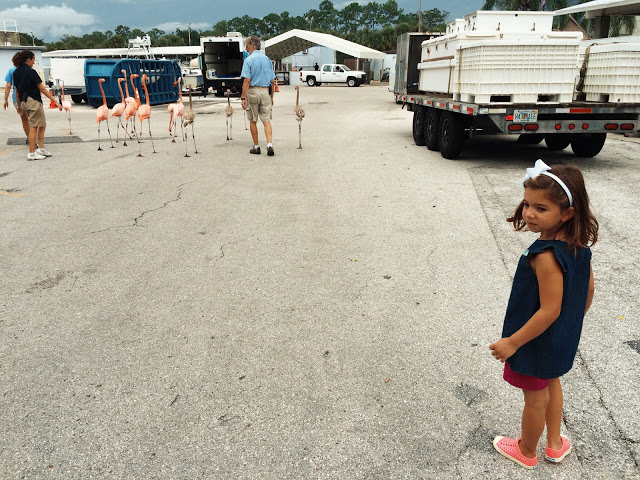 Our visit to Sea World started out with a special behind the scenes tour. We went “backstage” to see where the animals they rescue go when they arrive at SeaWorld. When we first got behind the scenes, the first thing we saw were the flamingos “going for a walk”. We found out that throughout the day they leave their area of the park to go for a nice long walk. It was fascinating to see how they all walked together. Maggie always says she wants to be a dog walker some day and she laughed saying she “never knew she could be a flamingo walker”! 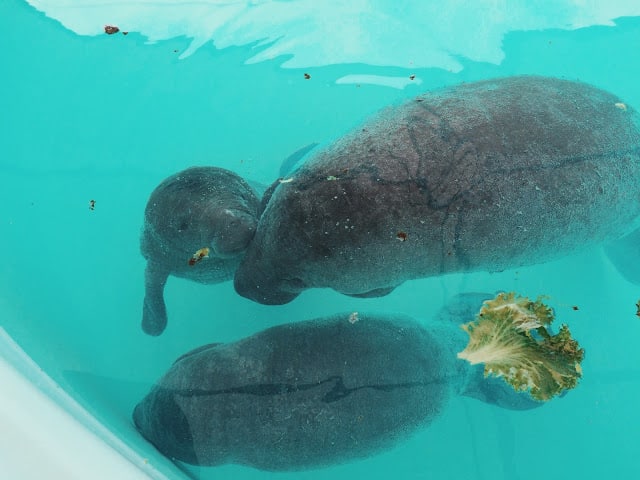 The girls and I were in awe over how many animals are rescued and rehabilitated by SeaWorld. We learned that some of the rescue team from SeaWorld was there during Hope’s (from Dolphin Tale) rescue – they were hooked. We saw tiny baby manatees that had just arrived. The girls thought it was hysterical that they drink from bottles just like their baby brother Tommy does. The team at SeaWorld was wonderful with explaining everything to Maggie and Alex.

Next it was time to meet the dolphins. The staff was incredible, totally picking up on what a special moment this was for Maggie and Alex. They not only called over a dolphin who was eager and happy to meet the girls, they taught them some of the commands and let the girls “train” the dolphin too. They had no fear and were both so happy to be with the dolphin. 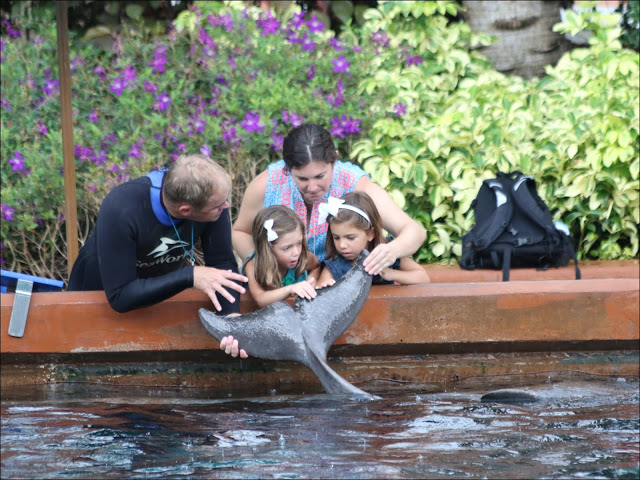 The adventure wasn’t over there. Next we went over to Dolphin Cove for our “Up Close Tour”. I got to get in on the fun too and luckily there’s a SeaWorld photographer to capture the experience because you can’t have a phone or camera in the cove. For this part, we met with a dolphin trainer who introduced us to Roka, our new dolphin pal. He taught the girls all about Roka, his skills, what he eats, and how he plays. He let them help with Roka’s tricks and let them give the dolphin lots of pets and love. 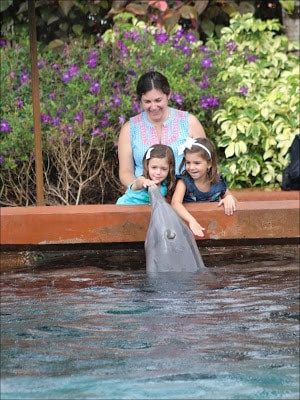 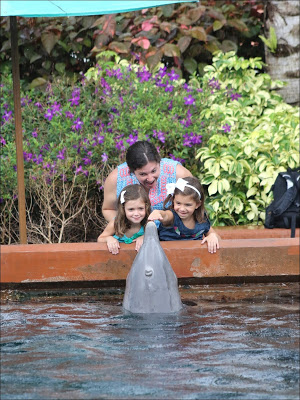 The day at SeaWorld was a special adventure for two  little girls that love sea animals and a very special day for me too. I try to do what I can to foster their imaginations and interest in things like animals. Neither of them like iPads, movies, or really anything that requires sitting still. They like to run around and pretend to be animals or rescuing animals. They want to be around animals as much as they can. 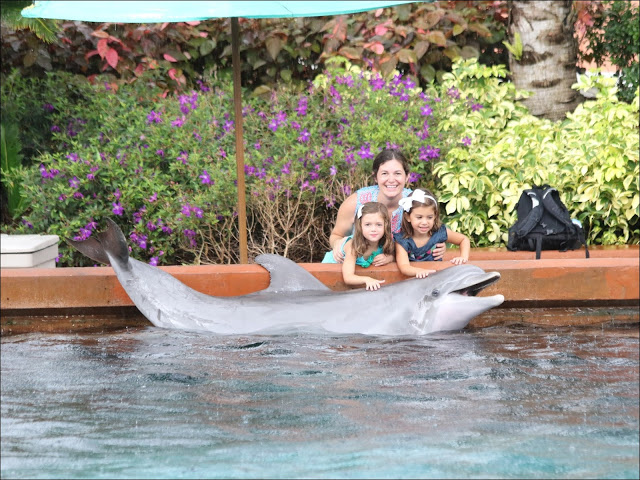 To have an opportunity to let them truly experience a day with dolphins was wonderful for me as a parent. I’m thankful for a staff of people that were just as happy and dedicated to creating a special day for my little dolphin lovers.