Is Mickey’s Not-So-Scary Halloween Party good for toddlers and preschoolers? If you’re planning a trip to Disney World in the fall and have a toddler and/or preschooler, you may be asking yourself this question. We went to Disney World last October with a baby, toddler, preschooler and 1st grader. Before the trip I went back and forth on whether or not to buy the tickets to Mickey’s Not-So-Scary Halloween Party. We ended up going and I am so glad we did. It ended up being the highlight of the trip and the best experience we have had in the park!

Here is why I was NOT going to attend:

So, I planned the whole trip without Mickey’s Not-So-Scary Halloween Party and decided we’d do it someday when the kids were older. Then at the last minute it was added it to the itinerary. Instead of using a Park Hopper ticket for the day we were going to Animal Kingdom, we bought JUST an Animal Kingdom ticket and then decided we’d go to the Halloween party at night. We went got to Animal Kingdom 10 minutes before it opened and we were the first ones in the park. We enjoyed it until about 12:30pm and then went home for the boys to nap and the girls to rest/ cool off in the pool. Then, we got the kids in their Halloween costumes and went to Magic Kingdom for the big night! 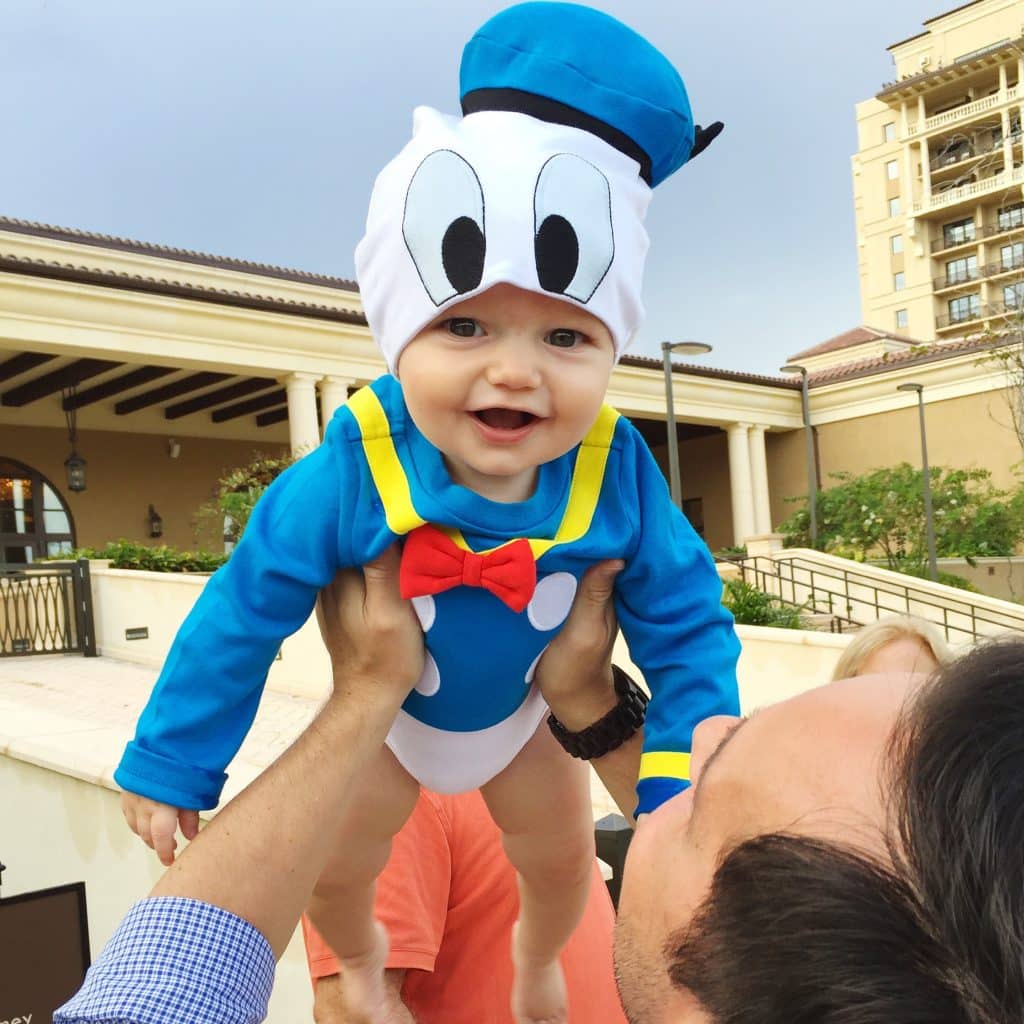 So here’s why I would definitely recommend Mickey’s Not-So-Scary Halloween Party for toddlers and preschoolers (it’s basically all the reasons why my list above for “not doing it” was totally wrong):

1.Mickey’s Not So Scary Halloween Party gives you admission into the park at 4pm. Which is earlier than I thought! We got in (no lines) did a few rides and then had a fun dinner in the park.

2. It’s NOT scary. I mean you’d think I would have just “believed” in the title of the event…. but I guess I had to see it to believe it. It’s not scary at all. Plus all the people dressed up (guests not people that work there) are all in Disney Halloween costumes. I’m not sure why I thought there would be kids dressed as Chucky running wild with bloody masks… but in case you thought that too… there’s not. It was not 1 bit scary. Even the parade  – yes there are some skeletons and tombstones, but they’re marching and dancing to a super upbeat, happy, catchy Halloween song. 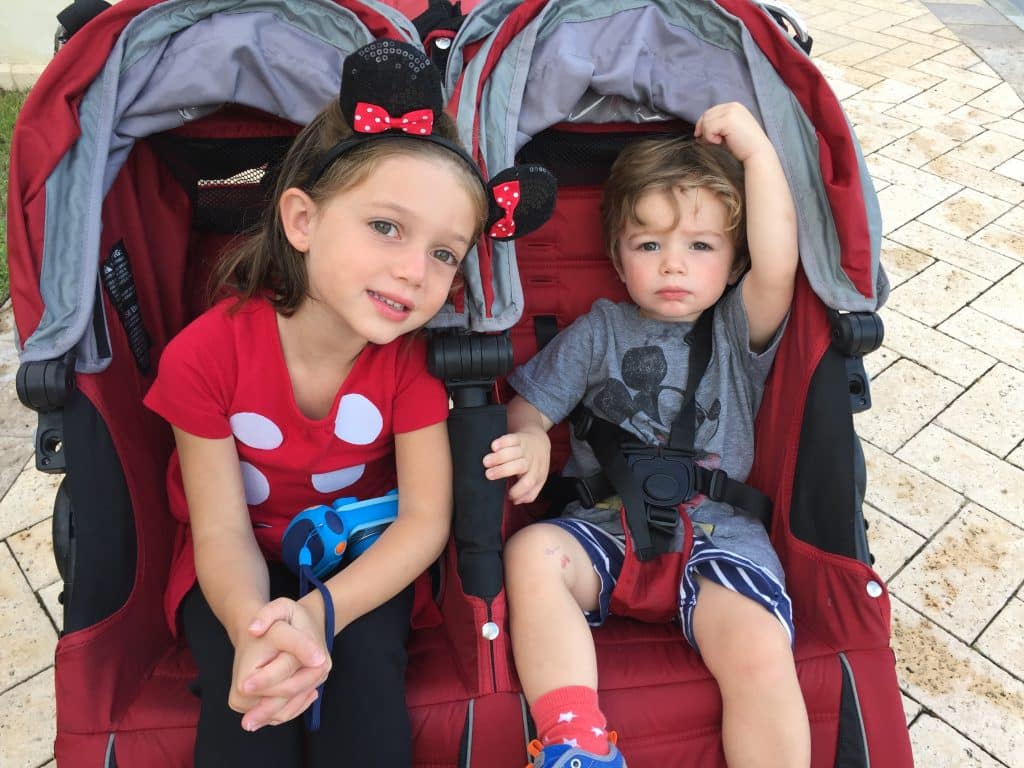 3. It’s much more festive and decorated at the party than during the day. Plus you get a Trick or Treat bag of candy when you walk in and there are tons of park guests all in their Halloween costumes. It’s a lot more festive than I anticipated and worth the extra cost.

4. Best time to meet characters: We have been to Disney with toddlers and preschool age kids 3 times over the past few years and met and saw the most characters ever at the Halloween party. There were more characters out than usual (in my opinion) and MUCH shorter lines. Plus…. toddlers and preschoolers will probably think a lot of the people there attending the party ARE characters because their costumes are so good. My girls still talk about seeing Cruella twice that night…. both were just people visiting the park in great costumes of their own!

5. No Lines! I we rode more rides at Mickey’s Not-So-Scary Halloween Party than we did during the day on all 3 trips combined. Maybe it’s because my kids are little and like the “little kid” rides and many of the people at the Party had older kids. Maybe we just visited on a very slow night (but the park was packed during the day)… but we rode a few rides two or three times in a row just because there was no wait! I would say the longest we waited for a ride during Mickey’ Not-So-Scary Halloween Party was about 20 min. 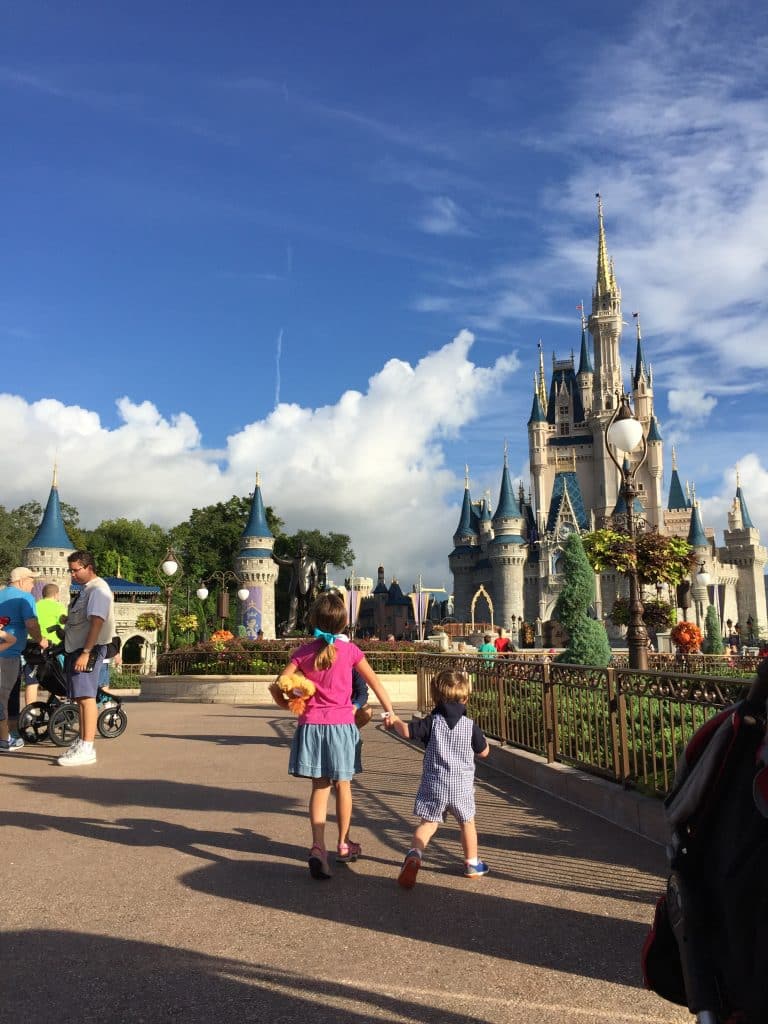 6. I actually packed bottles, blankets, binkies, etc thinking the boys (9months and 2 at the time) would go to sleep after dinner. No way… their 7pm bedtime was history on this fun night. Both were still up having fun at 10pm. I because it wasn’t crowded and we were all so relaxed, the little ones enjoyed it more too.

7. It’s so much cooler out! When we were there the 1st weekend of October, it was VERY hot. During the day, the kids were a sweaty mess by noon. At night, at the Halloween Party, it was so much cooler out. I have a toddler that hates being hot and sweaty in the stroller, so he was much happier in the park at night when it was cool out. 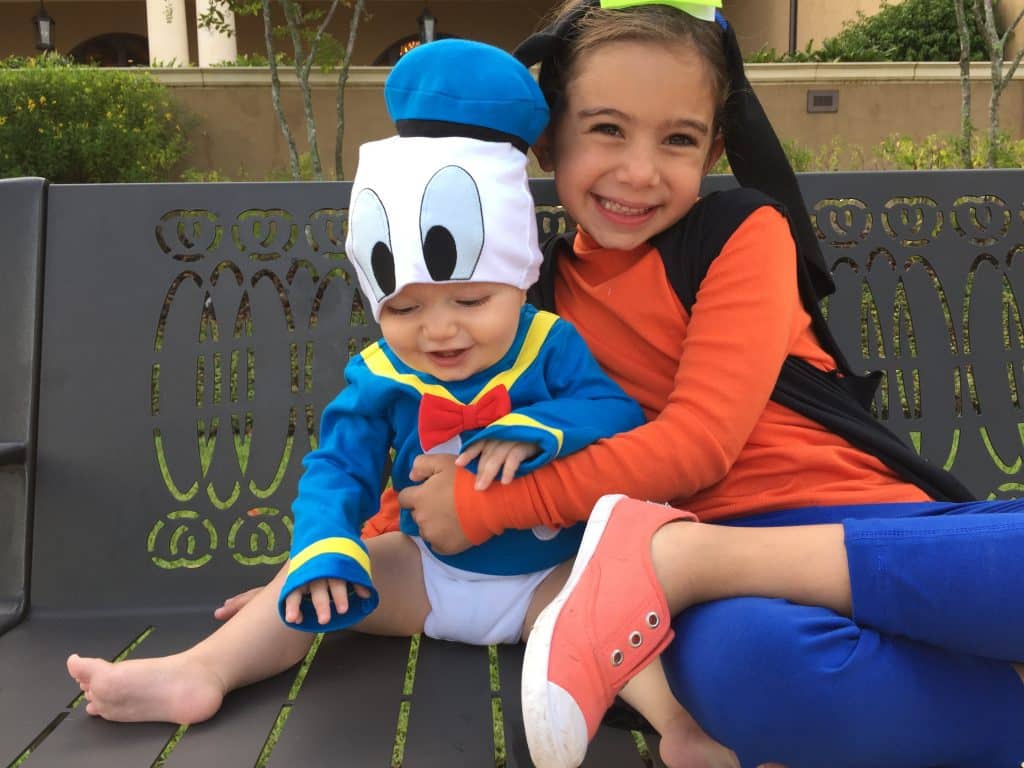 8. I was nervous about having a bunch of little kids in a pitch dark amusement park but in reality, we were there for about 5 hours before it got pitch dark. Then, by that time, we were watching fireworks and leaving. We got there right at 4pm and while it started to get darker by the hour, most of the time we were on rides and meeting characters it was plenty light out to feel safe with them all running around.

9. If you’re going to Mickey’s-Not-So Scary Halloween Party, pack your kids costumes. Most people in the park will have costumes on – kids + adults. I was wearing a baby in the Babybjorn and he was in a costume, so I counted that as my costume! I made the kids Mickey and Pals costumes and they were so easy and really comfy too. Here’s the how to: DIY Mickey & Pals Costumes. 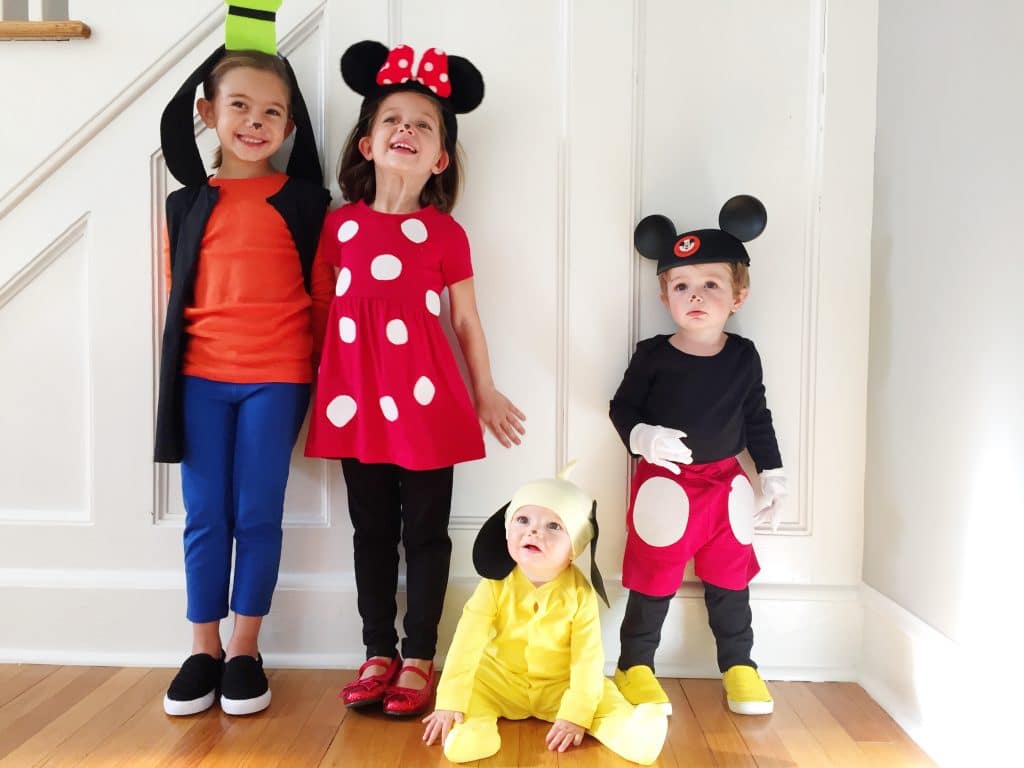 10. It was the opposite of meltdown central: I think I may have found the trick to NOT having your kids meltdown at Disney World: take them to the park in the evening when there’s an event that you need a separate ticket for (Halloween, Christmas, etc). I have seen many a meltdowns from my kids in Disney World over the past few years. Mine seem to do much better when it’s: not crowded, much cooler temperatures, more characters they don’t have to wait in line to meet and not having to wait in long lines for rides.

I would highly recommend Mickey’s Not-So-Scary Halloween Party for toddlers and preschoolers. It was truly a Disney night to remember for our family!

For more tips on taking kids to Disney World, check out these posts: 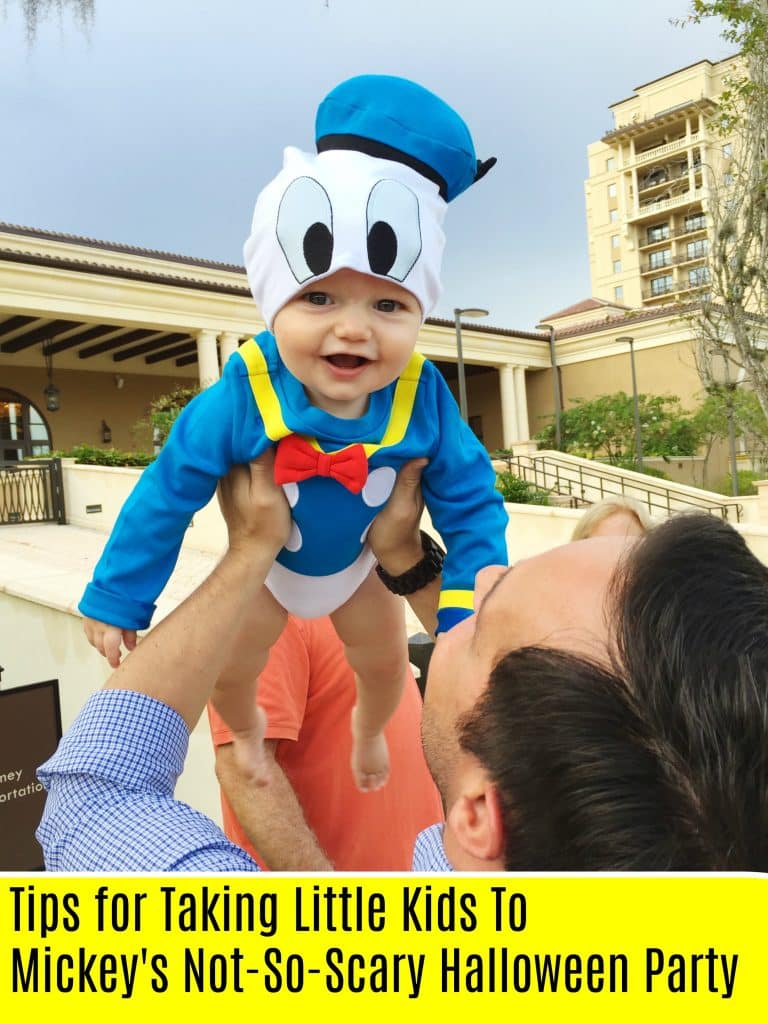